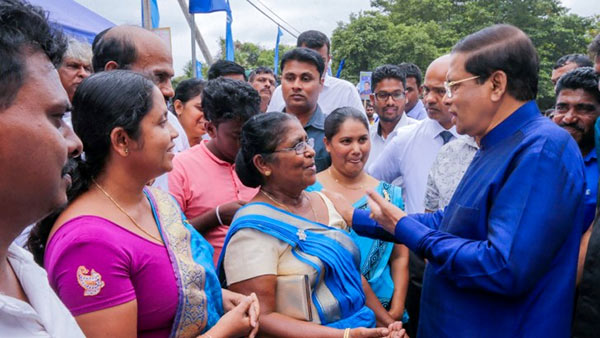 The President made these remarks addressing a public rally held in Sevanapitiya , Polonnaruwa, today (01).

Addressing that gathering, the President further said that today, the people of the country will not become victims of false propaganda and opportunistic political tactics.

President Sirisena said that today the country needs a system of government in which people have to play a pivotal role, instead of a dictatorship and further said that during the past three years he was committed to bring that essential political as well as social transformation into the country.

‘Today, corrupt politicians are aligned as a single group’, the President said that adding the people should understand this reality and most of them are demanding the power to achieve their personal development, but not to serve the people or to develop the country.

As a result of the reluctance shown by the leaders of the previous regime to take action against the corrupt politicians and to  speak about it, frauds and corruptions activities were increased in the country over the recent past, the President added.

The President recalling the incident where he discussed about the fraud and corruptions of the then government with the Ministers and MPs as the Minister of Health while attending a meeting on development activities of the government, held at the Central Bank headquarters in Colombo, the next morning he was summoned by the then Leader and asked him to refrain from talking about fraud and corruption of the government as a Minister and as the Secretary General of the Party, and he was asked whether he is trying to start a new journey?. The President added that on that day he decided to commence a new journey for the betterment of the people as he was not able even to talk about corruption.

Political differences, social status or relations will not be considered when taking actions against the fraud and corruption, the President said that adding he has shown this through his actions that the rule of this country enforced against in a similar manner even for his own brother.