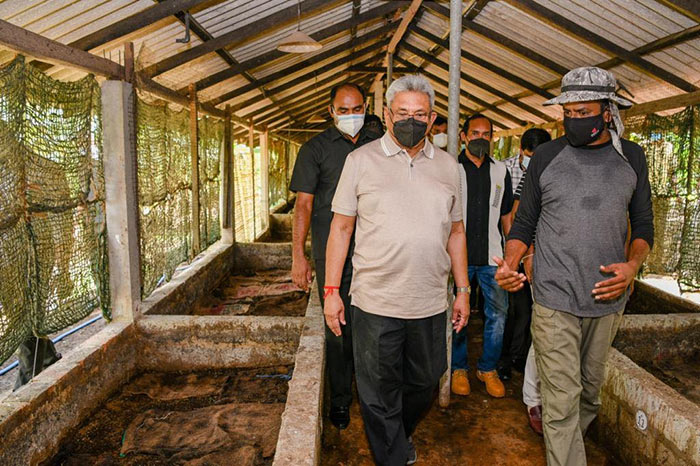 “I have given priority to the farmers – I will not erode that trust placed in me. Make decisions after considering good as well as bad elements – do not fall prey to provocative politics – rally for the benefit of the future generations,” President Gotabaya Rajapaksa urged the farmers. The President made these remarks while inspecting the organic fertiliser processing centre and the organic farm at Bunnahepola in Udubaddawa on Saturday (23).

The President inspected the centre’s organic fertiliser production process and techniques used to maintain product quality. President Rajapaksa then visited the farms and inspected the vegetables and other crops grown there. The process of preparing the soil using organic manure was also observed.

This processing centre produces about 12 tons of compost manure per month using earthworms. In a coconut plantation of about 13 acres, fruits such as papaya, banana, passion fruit, vegetables such as cabbage, beetroot, butternut squash, a turmeric cultivation and a model paddy cultivation are being cultivated using organic fertilisers. The President said that his objective is to improve the living standards of the farming community.

“In this regard, I’m ready to make difficult decisions that political leaders may hesitate to make. Many calls were made not to get involved in a war back then. Similar to how the 30-yearold war was brought to an end, the goal of green agriculture will be achieved irrespective of the obstacles,” the President said. The President said that he is not focused on votes but on doing the right thing for the people and added that he is ready to take bold decisions for what’s right and focus only on the needs of the people.

Though the global chemical fertiliser companies place obstacles by provoking various forces, the President said that he is not afraid of any of them and added that the people had elected him as their Leader to make the right decisions. President Rajapaksa made this visit to encourage entrepreneurs engaged in organic farming. The President also inspected the Garbage Recycling Centre at the Udubaddawa Pradeshiya Sabha premises.