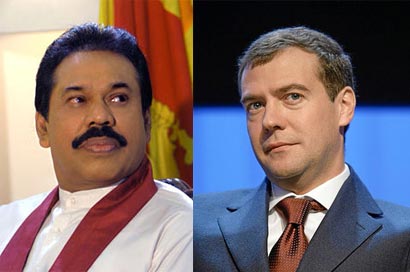 President Mahinda Rajapaksa will leave for Russia on Tuesday to seek both Moscow’s support for Sri Lanka and brief world leaders on key issues facing the country.

He is scheduled to have one-on-one talks with President Dmitry Medvedev. He will thank the Russian President for the support extended by Russia after the release of the UN Advisory Panel’s report on alleged war crimes in Sri Lanka.

Rajapaksa’s talks with other world leaders will take place when he meets them at the St. Petersburg (former Leningrad) International Economic Forum. The theme of the conference from June 16 to June 18 is the definitive platform on Russian and Emerging Market Economic Environments. It will focus mainly on Russia’s modernization.

External Affairs Ministry sources said yesterday President Rajapaksa would brief President Medvedev on matters arising from the UN Advisory Panel’s report on alleged war crimes in Sri Lanka. He would seek Russia’s support should the matter come up in any international forum in the future, these sources said.

Among the world leaders taking part in the St. Petersburg Forum is Chinese President Hu Jintao.

An official statement from the sponsors of the Forum said a large number of Chinese and Asian business leaders from a wide range of industrial sectors were expected to participate.

6 Responses to President going to Russia for thank-you talks