President in Anuradhapura says agriculture will be country’s priority 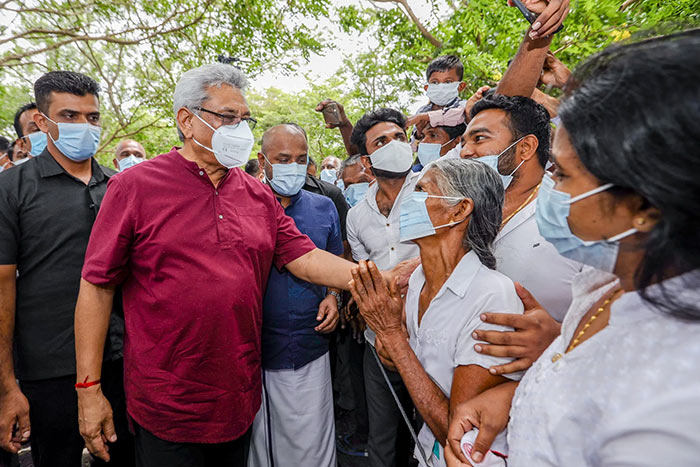 President Gotabaya Rajapaksa says that agriculture will be country’s priority after resolving number of persisting issues and shortcomings affecting it.

Issues such as shortage of water supply and fertilizer for agriculture are being addressed by the government. Failure to make payments due to suppliers on time has resulted in delay in the importation of fertilizers. The absence of a proper market and a price for their produce has rendered the farmers helpless. The President stresses that he will address these issues and will take steps to protect the farming community.

The President who visited the Thammannawa Nidahas Uyana village in Thalawa, engaged in a cordial discussion with the residents of the area and inquired into their well-being.

President Rajapaksa also looked into the requirements for improving water supply facilities of Eeriyagama tank. The president has given instructions to the Resident Manager to take steps to provide solutions for the prevailing issues.

Minister S.M. Chandrasena and former Chief Minister of the Province, S.M. Ranjith were present on this occasion.

The President also joined the public gathering organized near Kala Wewa in support of the former Minister Duminda Dissanayake.

President Rajapaksa sought the views of the public regarding the current condition of the road construction activities as well as their agricultural activities.

The President also paid homage to the Kadawara Devalaya near the tank bund.

The Maha Sangha of the area, other religious leaders and people living in the area were in attendance. The President who was seen engaged in a very cordial discussion with them paid his attention to the issues faced by the farming community particularly the issue of water scarcity.

People in the area who represent a number of ethnic groups informed the President cultural issues they faced.

The Kekirawa Trade Association handed over a set of proposals relating to the development of the area, to President Rajapaksa.

The President also observed construction works of the Ganadevi Kovil.

The President joined in another public gathering held in Galkulama area Mihintale in support of SLPP candidate T.M. R. Siripala.

The President who engaged in a very cordial discussion with the Maha Sangha and the public drew his attention to the issues of area.

Home » President in Anuradhapura says agriculture will be country’s priority