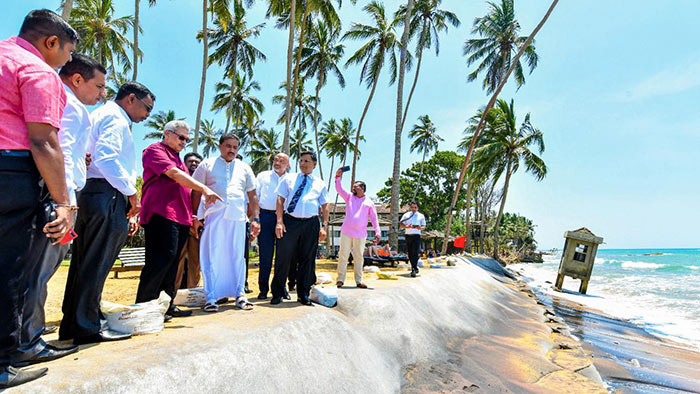 After attending a ceremony held in Kalutara President Rajapaksa visited the beach. The 2017 floods caused erosion of sand bars close to the estuary. This has resulted in the erosion of a vast area of beach in Kalutara North due to encroaching waves. As a remedy, coastal conservation was begun dredging sand from deep sea.

The project is in three stages. Under the first phase of the project, an artificial beach two km long and 25 m wide will be constructed. Three hundred thousand cubic meters of sand will be used for the filling process.

The 500 meter section has already been completed. ‘The first phase is expected to be completed within two weeks’, Chief Engineer of Coastal Development, Sujeewa Ranawaka told the President. The one kilometer stretch Angulana beach under the second phase and 500 meter Mount Lavinia beach under the third phase will be developed. Ranawaka said that all three phases of the project could be completed by April 20.

President Rajapaksa instructed officials to carry out an immediate investigation into the failure to keep proper daily cleaning services and to clean up the city as soon as possible. He also stressed that this process should continue.