President invites Tamil diaspora to work together to develop country 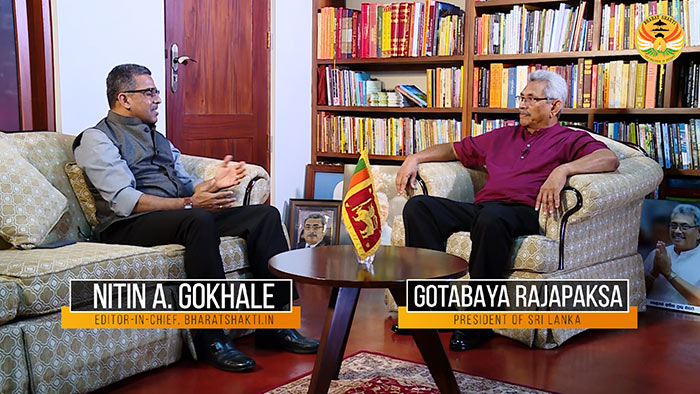 President Gotabaya Rajapaksa has requested the Tamil diaspora to work together to develop the country and help the people irrespective of their community.

The President has said this in an interview with Nitin A. Gokhale, Editor-in-Chief of Bharat Shakti.in and SNI.

When the interviewer commented on peaceful existence, the President said, “Yes, so rather than just criticising and I would like to even request the Tamil diaspora to forget these things, nobody is benefitted; rather we must work together to develop our country, help the people in our country irrespective of their (community). Everybody is a Sri Lankan citizen if they are born in Sri Lanka. They have equal rights.”

Q: Hello and welcome, I’m Nitin Gokhale and I’m privileged to have with me today Sri Lanka’s new President Mr Gotabaya Rajapaksa. A former soldier turned administrator and now the nation’s chief executive. Welcome Mr Gotabaya to this interview and I’m really honoured and privileged that you’ve given time to me. I think this is perhaps your first interview after taking over as Sri Lanka’s seventh executive President. When you spoke first after becoming President, you mentioned that we are equidistant from almost every power in the region and you want to be neutral. If I am reading correctly, national security and national priorities are your first priorities, rather than looking at who you align with. But this question always crops up, that’s why I’m asking you—is it China versus India in Sri Lanka? What is your view on this?

A: I have mentioned this even in my acceptance speech that we want to be a neutral country, it’s possible, there are examples in the world. But we know the Indian Ocean plays a very important role in present-day geopolitics – we are geographically situated in a very strategic location. All the sea lanes are passing close to Sri Lanka, from East to West. You know the importance of these sea lanes. Especially when Asia is developing and their produce has to go to the world but at the same time, when you develop, you need energy. The energy resource is still in the Middle East, it has to come. The minerals are in Africa, those things have to come. This is very important but the thing is these lanes must be free for the whole world, no country should control the sea lanes because that’s very important.

We understand the importance of the Indian concerns; we can’t especially act or engage in any activity which will threaten the security of India, that we know. We are in the region and India is a big power, is a big country. Though we want to be an independent, sovereign nation, we don’t want to get involved. We have to understand the points of view of other countries and act accordingly. But (what) everybody wants today, the most important thing, is economic development.

So, in our case, our involvement with China. In the last few years, especially during Mahinda Rajapaksa government period, it was purely commercial, but because from the very beginning, world analysts, the geopolitical analysts put us also into the orbit. Even Hambantota harbour, they tried to show as part of the String of Pearls, which circles India. But in our (scheme of) things it was not so, the requirement was ours, we understood, we should never give them control of the port to China. So that was a mistake.

A: Gave a lease for 99 years. And even though China is a good friend of ours and we need their assistance to develop, I’m not afraid to say that was a mistake. I will request them to renegotiate and come with a better (deal) to assist us. Today the people are not happy on that deal, we can think of one year, two years, five years, we have to think of the future, what will happen? So giving a small land for investment is a different thing. To develop a hotel or a commercial property is not a problem, that’s not an issue. The strategically important, economically important harbour, giving that is not acceptable. That we should have control. We have to renegotiate. Giving a terminal for an operation is a different thing, giving some location to build a hotel is different, not the control over a very important place, it is not acceptable. So that is my position. We want to work with India very closely.

And we want to work with China as well. Diplomatic relations and economic relations are everywhere. India is working closely with China. I know Indian investment goes to China, Chinese investment comes to India. Like that, we want investments and help but we will not do anything, we don’t want to get involved in the military and geopolitical rivalry. The other thing that I want to tell the world powers like India, Singapore, Japan, Australia, you know, the reality is they are scared of Chinese involvement, that’s a reality. But in our point of view, it is commercial. We are a small country and we want foreign investment to improve our economy. So I invite India, Singapore, Japan and Australia to come and invest here. Don’t allow only China to invest. These governments must encourage their private companies to come and invest, come and help us. Without leaving it to one country and then grumbling.

So I openly say this, because I want them to come and invest in this country. We are a small country, genuinely we don’t want to get involved in these things. Please understand that. Rather than putting pressure on us, understand us and get involved in the economic development of this country. There are many ways: I am not saying only money; take our products—we have tea, cinnamon, pepper, coconut—you can assist in agriculture, there is education, invest in high-tech companies, there are lots of ways. Definitely, I want to cut red tape; I want to cut difficulties in old rules and regulations for the betterment of the country. I will create an investment-friendly environment.

Q: That’s something that people should take note of. But you are going to India on your next overseas visit next week. What are three-four main points that you’ll talk about?

A: I will reassure the Indian Government that we will work with India as a friendly country. We will not do anything that will harm the security interests and I will request them to help us in investments in many fields and also help us in education, that’s very important, and also the development of technology. I think the present Indian Government, even Prime Minister Modi has changed how he approaches the neighbourhood.

Q: There’ll be a lot of things to talk about but I am sure you’ll have a better conversation with him as you come there. Let me just finally do two questions, one is, of course, the pattern of voting that happened in the elections and you mentioned it very cleary that you would have liked the Tamils and the Muslims to have voted for you but now you have been elected, you are also the President of the entire country. How do you take forward the reconciliation process with the minorities?

A: I believe development is the answer. For the last so many years, Tamil political leaders and also the Sinhalese leaders were talking about things that were not practical, impossible, only to fool the people. We should focus on what we can do first, you know, give everyone a good opportunity to live as a Sri Lankan in this country, to get an education, live a better life, get a good job and live in dignity, so I will create that environment. Let other political things go on; you can discuss but you can’t only focus on that, neglect the well-being of the population. What is important is to develop the countries, develop those areas, infrastructure development. We did what we can, we have continued with that. And push more private industries to these areas, to create more jobs and improve education, doesn’t only mean general education but develop vocational education. For a long period, kids who didn’t have the opportunity to go to school were fighting in jungles. Now give them some training so that they can improve their skills (and) they can get into certain jobs. Create these job opportunities. This is my focus: develop these areas so that they will get equal opportunities.

Q: So, the final question here is this: there is this western narrative about you, especially that you are authoritarian or a racist Sinhalese leader and then the Muslims have a lot to fear from your coming to power; how will you reassure the Muslims?

A: I think it’s the wrong perception that was created during the conflict period. True that I was in the army for 20 years; I was fighting as an army officer against terrorism, then I retired from the army and went abroad to live nearly for 12 years in the US. Then I came back as the secretary of defence but then people recognised me only as the secretary defence, they know me as the secretary defence so maybe because of that, they think that this man is authoritarian. I am a disciplined person that doesn’t mean (you have anything against a community). I have proved in my action that I’m not racist; I don’t work only for one section of society. That is why I invited the Tamils and Muslims and everybody to join me in developing the country, in bringing the country up. You know, the opposition can show me as a dictator or authoritarian or whatever but I am not. People will see in my actions but I want to tell them to join me. At the same time, I want especially the media to not go by the hearsay or rumours and don’t propagate these things; understand me, speak to me, meet me and see how I am doing, how I work and give the correct picture. It’s a small country, developing country; people should help us, not put obstacles in my way. That will not help anybody.

Q: Those charges that were there against some of your officers, sometimes against you also, about human rights violations that have come up in the last phase.

A: See war is not a rosy thing, whether you internally fight or whether the Americans come and fight in Iraq or Afghanistan or UK govt fights in Iraq or Afghanistan. Whether it is internal or outside, war is not a rosy thing and everything doesn’t go very smoothly but we are a poor country, we are a lesser power so our things are highlighted more. It’s very unfair to do that because as a nation we are Buddhist, we are a very peaceful nation, our history goes back thousands and thousands of years and we have our values, our culture is rich.

Q: Existence is very peaceful in that sense.

A: Yes, so rather than just criticising and I would like to even request the Tamil diaspora to forget these things, nobody is benefitted; rather we must work together to develop our country, help the people in our country irrespective of their (community). I’m sure if the minority community understand this if they do certain things which create suspicion in the minds of the majority community, only then the majority community will react. They have to understand that. Everybody is a Sri Lankan citizen if they are born in Sri Lanka. They have equal rights, everybody, but they should not do certain things. They have to understand reality. However much the society (may) move forward (but) even in the so-called advanced societies, these problems are there.

Q: There will always be differences between communities.

A: We have to understand.