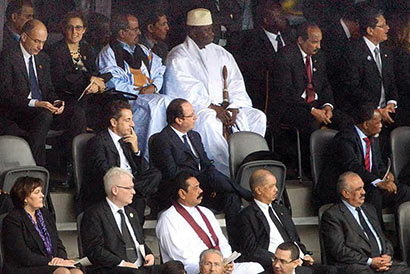 President Mahinda Rajapaksa now in South Africa to pay his last respects to the former South African President Nelson Mandela today (10) attended the State Memorial Service for the late President that took place at the FNB Stadium in Johannesburg.

A large gathering of state leaders and dignitaries were present at the memorial service.  Tomorrow (11) President Rajapaksa will go to Pretoria to pay homage to President Mandela’s remains that are lying in state at the Union Buildings.