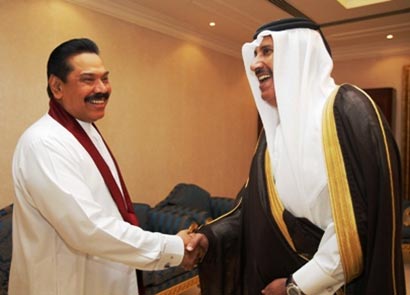 Qatar Emir Sheikh Hamad bin Khalifa Ali Thani and Qatar Prime Minister Hamad bin Jasim bin Jahar Althani at the discussion has further emphasised that State of Qatar main objective is to  see Sri Lanka achieving rapid development and  It is prepared to assist Sri Lanka in achieving this goal without any pre – conditions or agreements. The emir also has praised the growth achieved in the development field in Sri Lanka within  a short period after gaining peace from the 30 year long war with the able leadership of President Rajapaksa.

The Qatar Prime Minister has thanked President Rajapaksa for the hospitality accorded to him during his recent visit to Sri Lanka , and has said the cordial friendship between the two countries should be strengthened in the future.

President Rajapaksa has warmly thank Qatar for the unstinted cooperation and support extended to Sri Lanka at the recent UNHRC sessions.