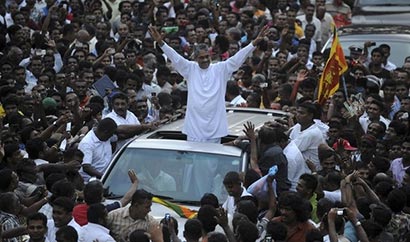 The Hindu newspaper said the Presidential release granted to his incarcerated rival General Sarath Fonseka is a conditional one and he cannot contest an election for the next seven years.

“The presidential pardon is conditional. He cannot vote or contest election for the next seven years,” the newspaper said in an item filed from Colombo.

When reporters asked Tiran Alles, the parliamentarian who negotiated the release with President Mahinda Rajapaksa  on the issue,  whether the release of Fonseka comes with  restrictions Alles replied he hopes it is unconditional but if it is not they will have to fight for it.”

The Deputy Leader of the UNP. Sajith Premadasa said he hoped the freedom of General Sarath Fonseka comes without any resreictions or limitations .

The following is the report the Hindu published:

“The former Sri Lankan Army chief, Sarath Fonseka, walked out of the high-security Welikada prison on Monday into a crowd of supporters and cadre from the United National Party and the Janata Vimukthi Peramuna.

The presidential pardon is conditional. He cannot vote or contest election for the next seven years

Thousands of ardent supporters had gathered right from the morning on the approaches leading to the prison, even as police kept a close watch. Mr. Fonseka, treatment at a private hospital here, was discharged in the morning after doctors declared him fit. His next stop was the Supreme Court, where he had filed appeals against his convictions. His counsel, Nalin Ladduwahetty, told The Hindu that the appeals had to be withdrawn for the pardon to become operational as only a convict can be pardoned.

Once this was done, the Justice Ministry was informed of the completion of the process. It processed the papers for the release of the former General. As news of the quick work on the government side flashed across the media, people began gathering in front of the prison.

As a measure of caution, prison officials blocked off visual access to the prison gates. Mr. Fonseka’s supporters claimed this was done to prevent photographers from getting a good shot of the former General walking out of the imposing doors.

The release was expected around 4.30 p.m. and as the crowd grew restless, a few began to lead them in slogan shouting. “Senpathi [General], senpathi senpathi” one supporter shouted over the megaphone. The other honorific that the crowd gave him included sinhaya [Lion] and janathipathi [president].

He emerged just before five p.m. and was seen waving to the crowd, beaming. He threw his fisted hands in the air repeatedly even as he accepted a few garlands. A short while later, he climbed on to an open jeep and made his way though the crowd. In a short speech in Sinhala, he said he would always be at the service of the people.

Though the way out of Welikeda lay through Temple Trees (the official residence of the President), Mr. Fonseka had steadfastly refused to seek a presidential pardon. He was arrested on February 8, 2010 on unspecified charges by the military police, cashiered, charged with wrongdoing in procurement, and awarded a 30-month sentence by a court martial. He completed this term on April 25 this year. In a second case, relating to defaming the Defence Secretary, Gotabaya Rajapaksa, he was awarded a three-year prison term.