SARATH FONSEKA IS TO WORK HARD FOR A STRONGER OPPOSITION 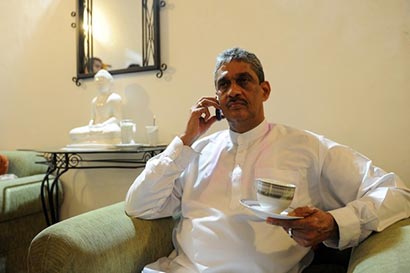 Although President Rajapaksa has released him from incarceration with a ban on elections for the next seven years Sri Lanka’s ex- Army Chief Sarath Fonseka is to work hard to build a stronger opposition in the country , he said in his first interview out of jail.

In his first interview with India’s Hindu newspaper he said, “The need of the hour for the country is to ensure that there is a strong opposition.”

Fonseka told the newspaper that he is preparing to launch a countrywide campaign and gain more support for the opposition.

The following is the full text of the story:

“Having watched the opposition parties lie in disarray from the confines of the prison here for over two years, the former Army chief, Sarath Fonseka was clear what the first step needs to be: “The need of the hour for the country is to ensure that there is a strong opposition.”

In his first interview after emerging from prison, he told The Hindu: “Irrespective of the party politics, and the colour and the party name, first we have to work towards a common opposition to ensure that there is a strong opposition against the government. And then, after that, who will lead it and all that, people will have to decide.” He is also preparing to launch a countrywide campaign and gain more support for the opposition.

An unusually subdued Mr. Fonseka, who met this correspondent at a house on the outskirts which was offered for his stay by Sanjeeva Ranatunga, brother of former cricketer and DNA politician Arjuna Ranatunga, admitted that during the 2010 presidential election, he had limited political experience. “But as I have seen people, I have come to know the politicians of this country and I have learnt more about the aspirations of the people…I have been watching what has been going on in the country and now I have a very good idea about the new direction that we should go,” he said.

Asked about the details of his pardon, he said he was not sure. “I don’t know. I have not seen it yet. And we have to still find out. There are no conditions…But the imprisonment… I have spent about two years in the prison. If there is no remission on that part, there will a problem. Because if you have been in prison for more than six months, you can’t contest or you can’t vote. So if they have not remitted that part, then, that will be another struggle for us — the way we came out from the prison,” he said. Tiren Alles, the MP from his party, said it was a conditional pardon and Mr. Fonseka indeed would not be able to vote or contest an election for the next seven years.

Fonseka dismissed talks about a deal between him and the President that resulted in the pardon. “Absolutely no deal. Deals will never take place. If I were that type, then I could have done that long ago after a couple of days after I was taken in.”

Asked why, in his opinion, the President had pardoned him now, he said: “Most probably it’s the people. Because they realise that the people are not appreciating this [the incarceration]. The people don’t agree with this. So any politician with little bit of commonsense should know that sentiments of the people can’t be totally ignored.”

Asked what his game plan was given that the elections were so far away, he said he was not in a hurry to go to Parliament, or win an election. “There is a huge task in hand for us. You have to first ensure that people start thinking on the right lines,” he said.

Getting his honour restored as the first four-star general was not very high on the list of his priorities. “I am not in a hurry to get it from the same people who tried to degrade that and insult that. I will get it one day definitely. The big hurry is not to get what I lost, the decorations or the promotions… If I was worried about those things, I could have continued with them same position with the same glamour. I was not greedy for those things anymore. Now I have a different target, a different objective,” he said.

Asked about his health, he retorted: “How do I look?” He added that the bronchial condition was due to excessive dust in the prison. With treatment, he said, he was about 80 per cent well.

‘I will be there for you’

Sarath Fonseka’s first words after he got out of prison were: “I will sacrifice my life for you who stood by me and supported at all times. I will always be there for you.”

His wife, Anoma, who was leading the struggle for his release, said: “I am so happy. Finally Finally all the effort bore fruit.”

Home » SARATH FONSEKA IS TO WORK HARD FOR A STRONGER OPPOSITION