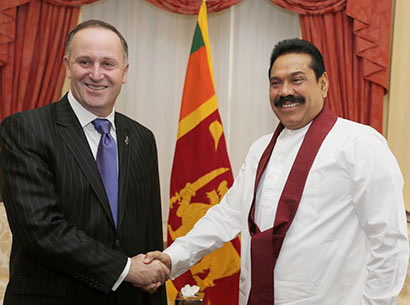 President Mahinda Rajapaksa attended a breakfast briefing with the Business Council for International Understanding (BCIU) on Thursday (26) on the sidelines of the 68th Session of the United Nations General Assembly in New York.

The meeting was organized to promote Sri Lanka as a destination for investment and “to show that Sri Lanka is open for business,” as one participant described.

Approximately 20 high-level officials from major companies attended the briefing. Companies such as GE, Honeywell, Forbes Magazine, Procter & Gamble, Canadian Commercial Corporation and MasterCard, among many others, were represented at the forum.

Established in 1955, the BCIU, with members from more than 150 world-leading companies, provides an ongoing forum for senior business executives to interact with heads of state/government, cabinet ministers, and senior government officials.