President Obama “No negotiations with terrorists: Lethal force is what they understand” – Sri Lanka used military force to eliminate terrorists while rescuing 300,000 people 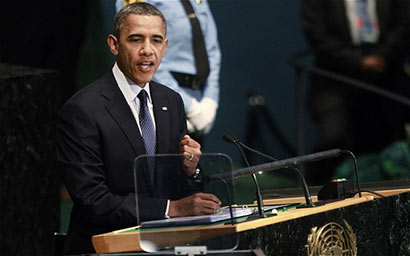 George Bush Jnr once said ‘you are either with us, or you are with the terrorists’ – Sri Lanka took that advice. The key word is ‘terrorists’. Thankfully, LTTE became defined as terrorists not just in Sri Lanka but 32 nations inclusive of the USA. What is odd is that in delivering a speech on the floor of the UN General Assembly, the US President declares that there are ‘no negotiations with terrorists’ – we could not agree with him more. President Obama goes on to say ‘lethal force is what they understand’, the issue we have with this statement is that the terrorists that Obama refers to were all created by US and Allies and transported to nations US wanted to target and thereafter US started applying lethal force violating international laws in the process. Ban Ki Moon and UN, we hope you are listening because we do not see any Advisory Panel being appointed or UNHRC head issuing statements against the US/Allies. We are therefore curious to know if the UN Charter has been changed to read UN & US/Allies against the Rest.

If “this group (ISIS) has terrorized all who they come across” – bring out the dossiers on LTTE and redistribute among the UNGA lest they may have forgotten or have been reading the doctored versions given by Father Emmanuel of the GTF and the rest of the Tamil Diaspora most of whom are now banned under UN Resolution.

“mothers, sisters and daughters have been subjected to rape as a weapon of war” – next hand over to the UNGA a copy of the film ‘Butterfly’ where director Vishnu Vasu shows how a father had buried his child 76 times lest the child would have been forcibly taken and turned into a child soldier by the LTTE.

“innocent children have been gunned down” – take out all the statistics of how LTTE committed premeditated murder upon sleeping villages, hacking to death sleeping mothers, children and sick grandmothers. The statistics need to also include the scores of young Buddhist priest cut and chopped as they were travelling in a bus in Arantalawa as well as scores of Muslims praying at the Kattankudy mosque. Show the list of Tamil low caste children taken by force and turned into child soldiers trained by Australian nurse Adele Balasingham whose instructions at the end of the training was to bite into a cyanide capsule and commit suicide when caught. She is living very happily in the UK and none of her crimes seem to interest Ban Ki Moon or any UN official in the least.

“No God condones this terror. No grievance justifies these actions. There can be no reasoning – no negotiation – with this brand of evil. The only language understood by killers like this is the language of force. So the United States of America will work with a broad coalition to dismantle this network of death”. Hallelujah. We in majority Buddhist Sri Lanka do not believe in a God, we did believe in peace talks because that was what the Western pundits prescribed all the while to Sri Lanka’s leaders. But for 3 decades we were never recipients of any peace. No UN came forward to say ‘enough’ and no official was bothered to take LTTE crimes before the world to demand action. In fact the LTTE proudly opened scores of global terror offices and even recruited a former parliamentarian as CEO while other foreign politicians inspite of their governments having banned the LTTE in their respective countries were not the least bothered to even attend pro-LTTE events and stand in front of massive cut outs of Prabakaran, the LTTE leader.

In terms of language we must have engaged with the LTTE in so many different languages….when the Norwegians Scandinavians and all others came to court the LTTE in what they termed to be the best ‘political solution’. On paper there was a ceasefire but in reality, arms and ammunition was passing ‘officially’ through Sri Lanka’s Port, our soldiers were confined to barracks and LTTE were given armed escorts and allowed to travel all round the island even abroad. The infamous ceasefire agreement even left a Tamil foreign minister assassinated. If US doesn’t negotiate with terrorists, why has Sri Lanka been asked to?

If US can use lethal force and we know what type of lethal force US has been using over the years, why has it been wrong for Sri Lanka to eliminate the LTTE terrorists after following the ridiculous ‘talk with terrorist’ instructions for 3 decades and failing each time with no abatement to its killing spree?

When President Obama says ‘bigger nations should not be able to bully smaller one’s’ please give us a break because unless there is a bigger nation that US we are all unanimous in who today’s bully is!

President Obama goes on to say “we have faced a more lethal and ideological brand of terrorists (all created by US & Allies) who have perverted one of the world’s great religions. With access to technology (courtesy the US) that allows small groups to do great harm, they have embraced a nightmarish vision that would divide the world into adherents and infidels – killing as many innocent civilians as possible” (we must wonder whether this is the true quest of creating these monsters).

The US President adds “I have made it clear that America will not base our entire foreign policy on reacting to terrorism” well if US foreign policy is not based on reacting to terrorism, should the foreign polices of other nations be different? Do other nations also not have a right not to be reactive but take proactive decisions and when they do are they to be rewarded by US drafting successive resolutions against them and the UNHRC head joining in with complimentary reports to give strength to the hypocrisy?

If the US has denied safe-havens for the Al Qaeda what is the US doing about Rudrakumaran the LTTE immigration lawyer named by the GOSL in its list of banned entities and individuals? What is the US and Allies doing by allowing scores of LTTE fronts to continue operating from their countries?

The US President needs to realize that the US/Allies created monsters out of Muslims and these monsters are using Islam against not only Muslims but non-Muslims as well and it is pretty much clear that all of the enemies of the US/Allies end up becoming enemies of these monsters as well. So there is no question about Islam, it has become a battering ram and the easy source from which innocent Muslims get plucked out because of the blind faith associated with the faith.

While the US President says “Collectively, we must take concrete steps to address the danger posed by religiously motivated fanatics, and the trends that fuel their recruitment.” Our question is if the US knows who is training them why have they not stopped them.

The best part of the US President’s speech came through the words “Nor do we intend to send US troops to occupy foreign lands” What are the US and Allies doing in Libya, Iraq, Afghanistan, Haiti, parts of Africa and then forcing countries to sign Status of Forces Agreements and establishing US bases in these countries? Whose decision has it been to use madrassas as breeding grounds for ready-to-fight Islamic terror groups that are being funded by the West so that they will not have to send Western troops but get the Islamic militants to kill their own? Was it not because the public of the West were opposing their soldiers to be killed that the decision to nurse Islamic terrorists was taken?

If US President believes that America has every right to ‘cut off funding the fuels the hate’ America should then come down upon all the banned LTTE fronts operating from foreign countries including the US and by Tamils who are holding US passports.

Put your money where your mouth is.. and nowhere else…however we know that these speeches are simply empty rhetoric.

UNGA has been turned into a floor where annually world leaders compete for the best delivered ‘prepared’ speech – hollow in content but full of lies and world superpowers not meaning a single word of what is read out.