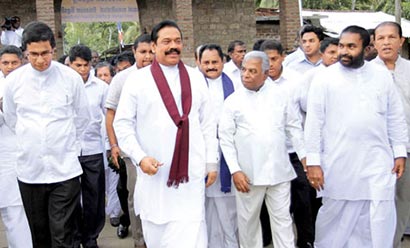 The Ran Weta had been constructed by the Buddha Sasana and Religious Affairs Ministry with financial donations at a cost of Rs 25 million.

The President also unveiled a Ran Piyassa of the Aluthnuwara Sri Dedimunda Dewalaya which is situated at the Keerthi Sri Raja Maha Viharaya premises.

The Keerthi Sri Raja Maha Viharaya which has a history of over 800 years is among the ancient and historic temples in the Kegalle district.

A baby elephant named Senarath was also handed over to the Sri Dedimunda Devalaya by the President. Senarath was nurtured at the Pinnawala Elephant Orphanage.

To mark this historic event, the Philatelic Bureau of the Postal Department also issued a first day cover which features the golden fence of the Keerthi Sri Raja Maha Viharaya.

Senior Minister for Rural Affairs Athauda Senavirathne said that all four access roads were renovated and carpetted to mark the occasion.