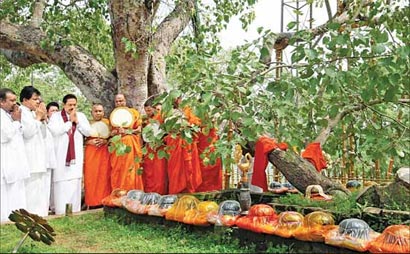 Earlier, President Rajapaksa accompanied by the First Lady and Namal Rajapaksa called on Atamasthanadhipati Ven Dr Pallegama Siriniwasa Nayake Thera at his aramaya and received his blessings after making an offering of atapirikara.

The President then offered malpahan pooja at Ruwanweliseya. After offering mal pooja at the statue of king Dutugemunu at the precincts the President exchanged pleasantries with the crowd of devotees present.