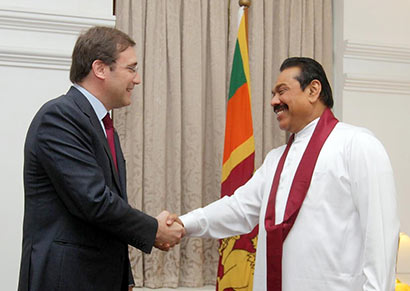 During the discussion with the President, Prime Minister Coelho said Portugal was interested in further improving relations with Sri Lanka, stating that it wanted “deeper relations” not only in the economic sector but also in the cultural and political areas as well. He further stated that his visit to the country was a very good opportunity not only to discuss matters pertaining to bilateral relations between Portugal and Sri Lanka but also others of international significance.

With this being Prime Minister Coelho’s first visit to Sri Lanka, President Rajapaksa explained to the Prime Minister the devastation the country experienced under the threat of terrorism, including how the Liberation Tigers of Tamil Eelam (LTTE) destroyed all infrastructure in the North and East and even in other parts of the country while the “people lived in fear.”

The President also said he was happy to see foreign leaders visiting Sri Lanka so that they can see for themselves the ground reality, pointing out that many leaders who came for the Commonwealth Heads of Government Meeting (CHOGM) last year were quite surprised to learn that what is reported in the media is far from the true reality in Sri Lanka.

Upon learning that Sri Lanka is currently seeing a GDP growth of 7.3 percent while the North has seen growth during the past few years in the range of 20-24 percent, Prime Minister Coelho said those were “very impressive results.”

“It will take time to heal the wounds of war because a lot of young people died from the South and the North,” President Rajapaksa said while describing Sri Lanka’s commitment to the reconciliation process.

The Ambassador of Portugal to Sri Lanka Mr. Jorge Roza de Oliveira along with several other advisors accompanied the Portuguese Prime Minister.
Minister of External Affairs Prof. G.L Peiris, Secretary to the Ministry of External Affairs