Sri Lanka : Lessons to learn from Muslims and Islam 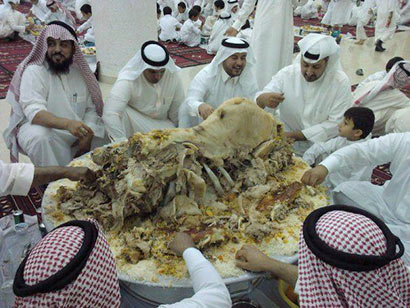 The Middle East is home to many faiths beside Islam. Yet strict laws govern how people behave. From public displays of holding hands to other forms of behavior are clearly identified as being unacceptable and taboo. In many of these Islamic countries a strict dress code prevails. Whatever laws declared have to be strictly followed to the word. Whether these laws, restrictions and regulations are correct, unfair or outdated for modern society is a different question. What needs to be said is that there are 57 nations in the world that declare themselves Islamic and even with other natives following different faiths living on their land, strict Islamic laws prevail giving open preference and privilege to Islam only. The question is why can that not be followed for other faiths as well given that countries like Sri Lanka it was entirely the Buddhist civilization that built up the nation? If the answers lie with the leaders ruling the country it is perhaps an opportune time to reverse the delayed justice that should have come with independence.

The constitutions of the most Arab countries including Egypt, Syria, Kuwait, Bahrain, Qatar, U.A.E. and Yemen refer to Sharia either as: A primary source of law or the source of law. Where the constitution describes Sharia as “The” principal source of legislation, the hierarchy implies that all other laws and statues must comply with the principles of Sharia. Islamic law “Shari`a” guarantees to non-Muslims “certain specifically stated rights beyond which they are not permitted to meddle in the affairs of the state because they do not subscribe to its ideology.” ONLY IF they embrace the Islamic faith, they “become equal participants in all matters concerning the state and the government.” In the context of Sri Lanka, it is impossible to get any Minister to even declare Sri Lanka as a predominately Buddhist country!

Dar-us-Salam are divided into 3 categories

It is clear that ‘muliticulturalism’ is the faultline for non-Muslim nations to be suffering a spate of incursions. There will be many to argue against this citing various verses taken from the holy texts however, people are aware that in practice no church, kovil or Buddhist temple can be put up in the Middle East while taking a religious symbol is taboo as well. Nevertheless, mushrooming mosques, madrassas are springing up in all ‘multicultural’ countries globally.

A Muslim is not allowed to:

A Muslim is allowed to:

Muslim states do not allow conversion from Islam

If Shariah is meant to uphold Islamic values and non-Muslims have no right to change that status quo, should Sri Lanka’s right to uphold Buddhist values not be given the same status quo? When Muslim nations are very clear about the state of Islam in their nations why are non-Muslim leaders wavering?

Let us give a few examples. No sooner Shariah law was implemented in Brunei, non-Muslims were banned from using 19 Islamic words. Allah, Azan (call to prayer), baitullah, mosque, Al Quran, fatwa, mufti, masjid, imam, shariah law, ilahi…the punishment is $4000 fine or a year in prison or even death by stoning. Muslims cannot leave their children with a non-Muslim baby sitter.

In Malaysia non-Muslims are also forbidden to use the word Allah. Some states in Malaysia have banned 32 religious words. These laws may not be written in the Koran or even advocated by Mohammed however, it is clear that laws prevail and non-Muslims have no choice but to follow them.

Many Muslims often argue that non-Muslims are unaware of what Islam is. Even Shariah forbids it being imposed on the unwilling. If such is so and the ‘unwilling’ element is a key component why have non-Muslim nations suddenly agreed to apply halal logos/labels, pay exorbitant taxes to Islamic private institutes? Why have state and commercial banks agreed to adopt shariah banking and other Islamic relevant statutes into non-Muslim societies of late? Are these new entities introduced and implemented to non-Muslim societies and non-Muslim majority nations established by non-Muslims or have Muslims demanded these to run parallel to the laws governing the country?

If the ‘unwilling’ component is very much part of Shariah why are Muslim political parties and Muslim representatives making such a fuss when the majority populace in Sri Lanka do not wish to have halal logos/slogans, shariah banking etc for these did not prevail formerly. Archaic laws brought in by British to create mischief should have been changed by post-independent governments and if such has not been done it is time to. Muslim nations with their laws strictly in preference to Muslims cannot fuss. Muslims themselves say that Shariah need not be accepted if it is ‘unwilling’ as Shariah forbids ‘compulsion’ (“there is no compulsion in religion 2:257). Shariah also obliges Muslims to be loyal to their nation of residence!

There is a contention that non-Muslims do not understand the basic principles of Sharia law and it is said that there is no true Sharia-compliant country in the Islamic world as well because Muslims leaders themselves are guilty of picking verses as they see fit to declare their own edicts just as non-Muslims themselves are to argue cases of incursions. The fact remains that with Muslims themselves confused about the understanding of their own religion giving rise to factions and frictions tearing the Middle East and Muslims apart, the lack of understanding by non-Muslims cannot be blamed for the chaos.

What needs to also be said and the argument relevant to this discussion is that Islamic nations and Muslims take pains to defend their religion and their space and stand firmly for what they are taught to believe in. From the ordinary Muslim to the Muslim leader, politician and cleric they are all very clear about the place of Islam. No bribe, no commission, no favors will ever make a Muslim or Muslim nation compromise or sacrifice the status of Islam. No Muslim nation will ever part with Islamic space or Islamic territory. No Muslim political leaders will ever compromise on Muslim rights though verbally they will preach co-existence.

There are Muslims that come to defend Islam. They write, issue statements, organizations are aplenty defending Islam, forums are many where Muslims gather. Inspite of the Islamic world being the poorest and illiterate the Muslims always help Muslims, their charities are generally all diverted for Muslim causes, even the halal tax system is generated to build a Muslim fund for Muslims. These are all lessons that non-Muslims can take a leaf from. Islamic nations are all very clear about the state of Islam and non-Muslims have to also follow the laws without fuss and anyone unwilling to follow can always leave the Middle East. It is because the Islamic world has clearly made their rules and requirements clear both Muslims and non-Muslims know how to follow them and what the repercussions are when they don’t.

What needs to next be said is that if non-Muslims cannot do the same of their own religion it is not the fault of Islam or Muslims.

10 Responses to Sri Lanka : Lessons to learn from Muslims and Islam

Home » Sri Lanka : Lessons to learn from Muslims and Islam