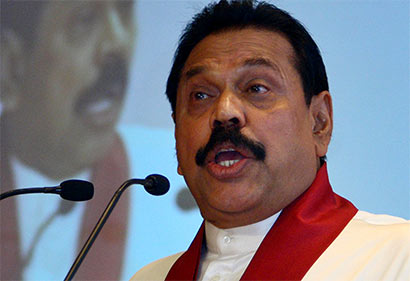 President Mahinda Rajapaksa has called on all SAARC countries to join forces against external threats.

“While SAARC practice has been to abstain from involvement in bilateral issues of a political nature, we must resist external manipulations,” President Rajapaksa said. “It would be morally in keeping with the SAARC spirit to join forces against external threats on member states.”

He made these remarks while addressing the inaugural session of the 18th SAARC Summit held at the Rashtriya Sabha Griha (City Hall) this morning in Kathmandu, Nepal.

The Summit this year is taking place under the theme of “Deeper Integration for Peace and Prosperity.” The leaders, in their speeches, discussed a number of different issues pertaining to the region, but one recurring topic was the threat of terrorism, along with the need for greater security and more collaboration as a region on fighting this menace.

“Terrorism has spread across all borders,” said Prime Minister Tobgay, stressing that SAARC nations need to work together “to prevent, combat and eliminate terrorism in all its manifestations.”

Afghan President Ghani also stated that he “won’t let anyone use our land against our neighbors.”

Minister of External Affairs Prof. G.L. Peiris, Secretary to the Ministry of External Affairs Mrs. Kshenuka Senewiratne and Sri Lanka’s Ambassador in Nepal Mr. W.M. Senevirathna were a part of the delegation that accompanied President Rajapaksa at the Summit.