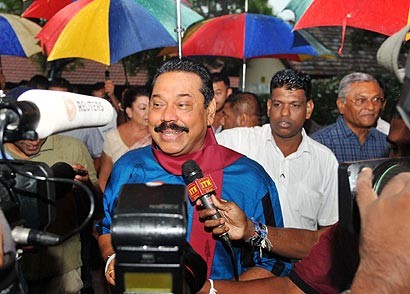 President Mahinda Rajapaksa cast his vote early this morning at the D.A. Rajapaksa Maha Vidayalaya in Medamulana, his home town of Hambantota. The President was accompanied with his elder brother Minister Chamal Rajapaksa, his elder son Namal Rajapaksa and the First Lady Shiranthi Rajapaksa.

Voting of the General Election- April 2010 to elect people’s representatives to the Parliament of Sri Lanka is underway and according to the reports voters are showing a keen interest to cast their votes.

After casting his vote President Rajapaksa said that once again Sri Lankans are exercising their right and they decide who’s best to represent them in the parliament. However President requested voters to give him a clear mandate and a solid majority in parliament which is absolutely crucial for rapid development of the country through unwavering stability after eliminating terrorism. “I need a strong government but it is the decision of the people of Sri Lanka on who should lead, develop and safeguard the nation” he further added.

President Rajapaksa’s elder brother Minister Chamal Rajapaksa and the elder son and the head of the Tharunayata Hetak organisation Namal Rajapaksa are contesting as candidates from Hambantota District for the election. 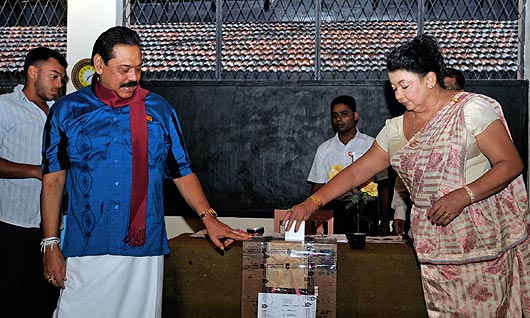