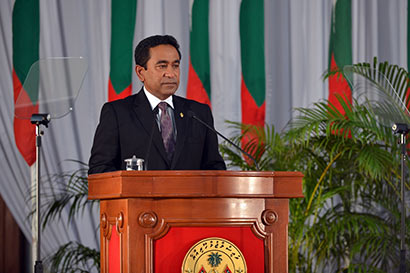 “This victory bears testimony to the confidence that the people of the Maldives place in your policies and your leadership,” President Rajapaksa wrote.

Diplomatic relations between Sri Lanka and the Maldives date back as far as the 1960s. Since then, the two countries have maintained close ties.

“The relations between Sri Lanka and the Maldives are characterized by a long tradition of friendship, close cooperation and mutual respect,” President Rajapaksa said. “Maldives’ steadfast solidarity and support extended to Sri Lanka in international fora has further strengthened the close relations that exist between our two countries.”

Sri Lanka and the Maldives also share strong trade relations. A significant part of Maldives’ exports and imports are with Sri Lanka, in particular the export of Maldives fish and the import of rice.

President Yameen, who became the victor in the run-off presidential election this month, is the half brother of former President Maumoon Abdul Gayoom.