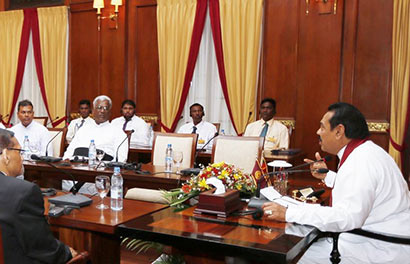 A group of priests from the Diocese of Mannar, along with several local politicians from the region, met President Mahinda Rajapaksa at the Presidential Secretariat this morning.

While thanking the President for all the development work that has taken place in the region, the clergy members expressed gratitude for the opportunity to meet the President in person and directly discuss local grievances.

“We give a special thank you to you and your government for all the work you have done,” said one of the priests from the Diocese. “After 30 years of war, we’re enjoying peace in Mannar,” said another priest.

President Rajapaksa said he values being able to learn about the latest ground realities directly from those living in the respective areas. He further said that the government is committed to continue developing the northern regions because every Sri Lankan deserves the same facilities regardless of their religion, ethnicity or geographical location.

The clergy members and the local politicians also discussed with the President, at length, certain grievances faced by the people of Mannar and identified several areas where the problems could be addressed quickly.