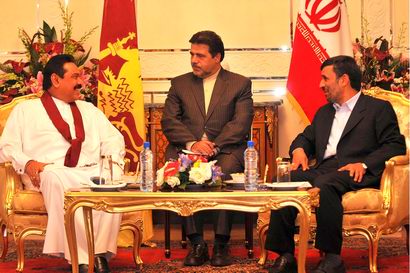 President Mahinda Rajapaksa held a series of talks with the Iranian leaders in Teheran on Sunday evening ahead of the G15 Summit which will convene on 17th May with the head of states from 18 countries.

He was warmly welcomed by the President of the Islamic Republic of Iran, Dr Mahmoud Ahmadinejad at President Palace. Both leaders held a discussion to strengthen bilateral relations and agreed to boost mutual cooperation. Iran also pledged to make earnest efforts to ensure progress within the G15 as Sri Lanka assumes the group’s Presidency.

President Ahmadinejad also extended his congratulations to the Sri Lankan President for receiving the Chairmanship of the 14th G15 Summit in Teheran. Presently it is chaired by Iranian President Mahmoud Ahamedinejad.

The G15 was established 20 years ago from developing countries in Asia, Africa and Latin America to enhance the economic, political and multilateral trade activities among the members and also to provide input for other international groups.