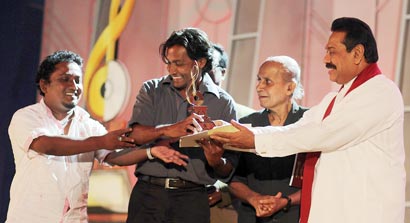 The National Music Awards Festival, the only awards ceremony to honour musicians in the field in Sri Lanka was held under the patronage of President Mahinda Rajapaksa at Temple Trees on 30 August. The President handed over awards to artistes who were recognized as the best in the years 2009 – 2010 period.

In a felicitation message to mark the occasion, President Rajapaksa said arts and creative sector plays a significant role and contributes a lot in Sri Lanka’s forward march towards the miracle of Asia. To make creations of high artistic value there should be political stability, peace and harmony in a country. Now the arts and creative sector in Sri Lanka has that opportunity after thirty years and can march forward since there is lasting peace in the island.

Sunil Edirisinghe was given the award for the most outstanding Sinhala male vocalist of the year for the song “Me Tharam Siyumalie.” Rajee Wasantha Welgama and Darshana Ruwan Dissanayake received the awards for best lyricist and the music composer respectively for the music of the same song. Deepika Priyadarshani Peiris received the award for the best Sinhala female singer for the song “Maage Deshaya.” Sami Thambi won the award for the best Tamil male vocalist of the year while the best female Tamil vocalist was Viroshini Wijeratnam. Many Sinhala and Tamil musicians were honoured for their outstanding contribution for the industry. The presentation of the book “Sahithyanjalee” authored by veteran lyricist Sunil R. Gamage was also handed over to the President. 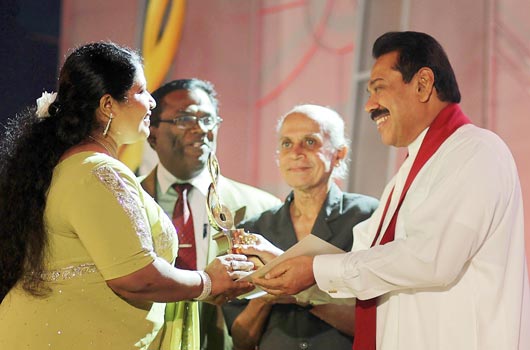 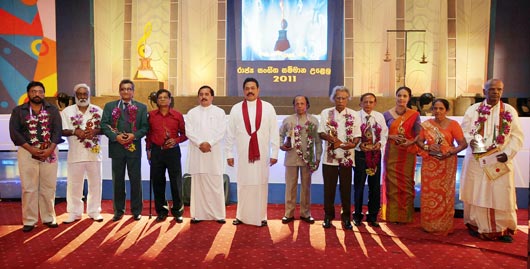