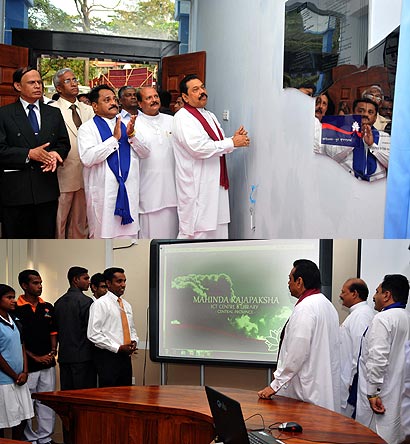 Mahinda Rajapaksa IT Centre was inaugurated by President Mahinda Rajapaksa at Gatambe, Kandy on 19th March. A new IT Computer Training Centre was built under the ‘Mahinda Chinthana Idiri Dekma (Brighter Future) programme’ and it will have facilities to train local children to gain computer knowledge which is not highly available outside the urban centres.

President Rajapaksa personally checked the facilities provided at the new IT Training Centre which is the first of many centres to come in the future. Later The President addressed the large gathering crowds including local students, staff and parents who participated to witness the opening ceremony. Governor of the Central Province Tikiri Kobbekaduwa and Chief Minister Sarath Ekanayake were present.