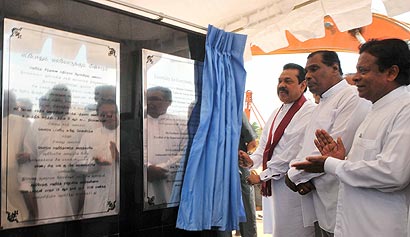 The construction work on the Norochcholaya Coal Power Plant Phase II in the Puttalama District was inaugurated by President Mahinda Rajapaksa on 18th March. The contract was awarded to the China National Machinery & Equipment Import & Export Corporation (CMEC), a Chinese Government owned company.

The total capacity of the power plant (Phase I, II & III) will be 900 Mega Watts and each phase will generate 300 MW of electricity. Phase I of the project is scheduled to be completed by November this year and it will add 300MW to the national grid and also build a jetty for coal handling, a transmission line from Norochcholaya to Veyangoda and substation at Veyangoda. It was implemented under the Chinese Preferential Buyer’s Credit loan of U$$ 300 million and a Buyer’s Credit loan U$$ 155 million, a concessionary loan.

The main objective of the project is to cater the increasing demand for electricity and also to supply steady and low cost electricity to the national grid. According to the Ceylon Electricity Board (CEB) the Norochcholaya power plant is expected to be completed by 2013 and it will reduce electricity unit from Rs.11.00 to Rs.5.00 per unit.

However the government has already started to upgrade the Lakshapana, Ukuwela and other hydro power stations in the country and the Kerawalapitiya power plant also added 300MW to the national grid last week.