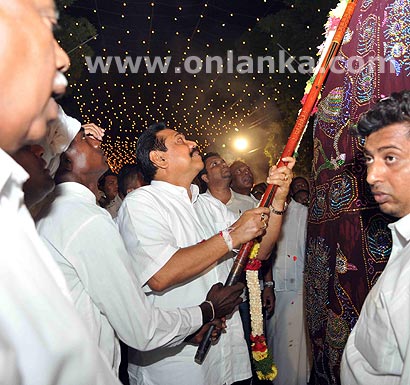 The annual Esala perahera of the Ruhunu Katharagama Devalaya took to the streets on the Esala full moon Poya day on 25th July. President Mahinda Rajapakse also participated at the festival and was among the thousands of devotees and spectators who flocked to Katharagama from all the corners of Sri Lanka.

A number of special rituals related to the historic Katharagama Esala perahera that are believed to have been performed since Great King Dutugemunu’s era took place on the final day. Chief Minister of the Uva province and the Basnayaka Nilame (Chief Custodian) of the Katharagama Devalaya, Shashendra Rajapaksa lead the Perahera. President Mahinda Rajapaksa and his elder brother and the Speaker of the parliament Chamal Rajapaksa graced the occasion as chief guests. Venerable Dr Aluthwewa Soratha Nayaka Thero, Chief Incumbent of the Katharagama Kirivehera was present at the occasion.

The final day Randoli perahera left the temple terrace and proceeded to the Kirivehera in Kataragama, where sacred offerings were made. On its way to Kirivehera, perahera t passed the Maha Devale, the Ghana Devale, the Kirivehera and the Ashtapala Bodhiya. Thereafter it entered the streets from the main Wahalkada of the Kataragama Devale and reached the Walli-Amman Devale. After the conduct of religious rites, the Perahera then made it back to the Ruhunu Kataragama Maha Devalaya.

This year a number of dance items and several special upcountry and low country dance acts also added to the glamour of the event. Elephants in the perahera were increased up to 24 than previous years. Gratitude was extended to all those who contributed towards making the perahera a success.

President Mahinda Rajapksa met devotees from North and East taking part in annual religious ceremonies connected with Katharagama main festival. He also talked to few young dancers who participated at the perahera. He is also seen here placing a garland on the Relics Casket (Sadhathuka Karanduwa).

All festivities concluded this morning on Monday, after the Water Cutting ceremony in the Menik Ganga. Finally Shashendra Rajapaksa, Basnayaka Nilame of the Katharagama Devalaya reported to the President that the Perahara has been concluded.

Meanwhile the tusks believed to be of Kandula, King Dutugemunu’s elephant were on display.

Last month President Rajapaksa visited the sacred town and held discussions with temple and Devala officials on Esala Perahera arrangements. The president spoke at length about security and other arrangements in place for the perahera, one of the country’s best-known religious pageants. 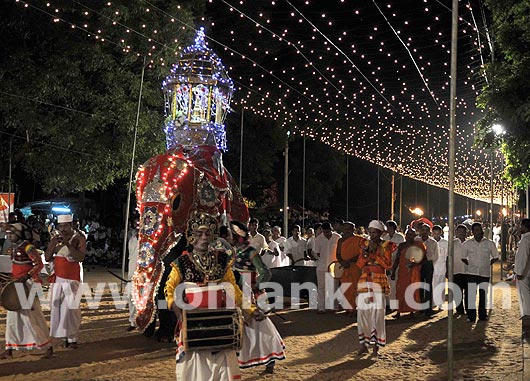