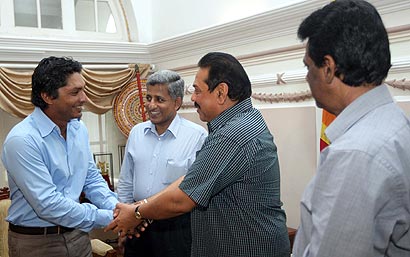 President Mahinda Rajapaksa kicked off the ICC World Cup Glory Express-2011, a procession in preparation for the upcoming Cricket World Cup from Colombo on 08 January. The procession started with greetings from the President from Colombo ( near Temple Trees), will march through all parts of the country over the next few weeks and ending up at the Hambantota Sooriyawewa International Cricket Stadium the day before the Cricket World Cup begins.

After the Sri Lanka Cricket Board officially announced the World Cup squad, the Sri Lankan Cricketers who will be participating in the World Cup tournament met President Rajapaksa at Temple Trees. Thereafter President Rajapaksa inaugurated the World Cup Glory Express along with the national cricket team members and officials near Temple Trees. He said the Sri Lankan cricket team that, that the journey towards their victory with team spirit will receive his and the blessings of the nation. The President extended his greetings to the tour by placing his fingers on a replica of the Cricket ball which depicts unity, brotherhood and the blessings of the nation.

At the inauguration, Sri Lanka Cricket Captain Kumar Sangakkara said that the selected team was well-balanced and was very positive about the tournament.

The World Cup Glory Express- a 42 day island-wide promotional tour was inaugurated in order to raise the awareness, mobilize support and greetings from every Sri Lankan for another victory for the country. A vibrantly decorated mobile float complete with a giant cricket ball, began its tour and at every stop along its tour the World Cup Glory Express float will encourage cricket fans to pledge their support for the tournament by signing their well wishes upon the larger than life cricket ball.

Sri Lanka, India and Bangladesh will host the World Cup-2011 beginning February 20 till April 01. Including a semi final, Sri Lanka will host 12 matches at three venues. Two refurbished International Stadiums in R.Premadasa- Colombo and Pallekele- Kandy, and newly-built international cricket stadium at Sooriyawewa in Hambanthota are the three designated venues for the world Cup.