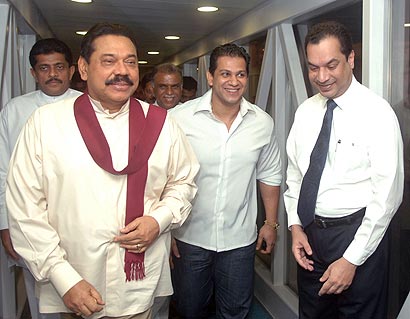 President Mahinda Rajapaksa returned to the island after a successful three day official visit to China on 1 November. The President and his delegation were in Shanghai, China at an invitation extended by the Chinese Government to participate as a special guest at the closing ceremony of the 2010 EXPO Trade Exhibition which was concluded in Shanghai on 31 October.

The six months long Expo 2010 Shanghai China Trade Exhibition in Shanghai, under the theme “Better City – Better Life” that showcased the urban life of world cities in 21st century. The first of its kind event, staged in a developing country with the participation of 56 countries and 246 international organizations, has attracted more than 74 million visitors.

The EXPO World Exhibition was first organized in England in 1858, targeted at showcasing to the world innovation of the industrial revolution. Since then it was held on 41 occasions in many countries once in five years targeting various development themes.

During his visit, the President had an opportunity to meet his Nepalese counterpart Ram Baran Yadev and held bilateral talks. President Rajapaksa promised to extend his fullest support for the Lumbini Development project, a sacred Buddhist site. The Nepalese leader highly appreciated Sri Lanka’s support for mediation to address the political crisis in Nepal. Both leaders also focused on the promotion of tourism and education in both countries.

On the final day President Rajapaksa met Chinese Prime Minister Wen Jiabao for a bilateral discussion at Xijiao Guest House in Shanghai. Chinese Premier has pledged to support Sri Lanka to develop its infrastructure, particularly the highways network and bridges and uplift the general living standards as well as to achieve a higher growth rate in Sri Lanka. The bilateral talks have mainly been focused on the progress of mega development projects that are currently being funded by the Chinese government. The Hambanthota Port, Mattala International Airport and Norochcholaya coal power plant are some of the large scale projects currently funded by China. In addition China has funded to renovate and upgrade the facilities of hospitals in the North and East provinces and to construct the first phase of the Matara-Kataragama rail line in the South and the Pallali and Kankasanthuraya rail line in the North.

The next EXPO Trade Exhibition will be held in Milan, Italy in 2015.