President says reversals will be turned into success 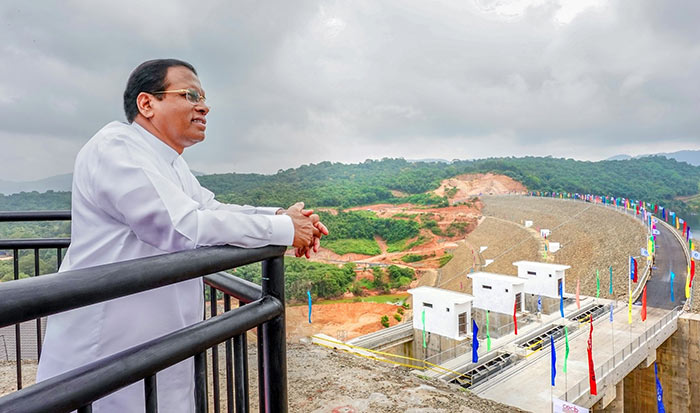 President Maitripala Sirisena said that moves will be taken to fulfill the aspirations of the people, who came forward with a political revolution in 2015.The President was speaking at the ceremony to commission the Kaluganga Reservoir and Laggala Green Town at Laggala yesterday.

Addressing the massive crowd, President Sirisena said that during the last four year period, certain aspirations of the people, who stood for the Good Governance concept were fulfilled, while some could not be achieved.

“The people of the country elected me on January 8, 2015 not only as the state leader, but also as the chief servant. During this four year period, many broad measures were taken to strengthen the democratic rights of the people, widen freedom, create a peaceful environment and society, create a free media, establish an independent judiciary, an independent state service,” the President added.

“Besides, many vital measures were taken to strengthen the country’s economy. During the past four year period we dedicated ourselves immensely for achieving the aspirations of the people, who helped form this government,” he noted.The President added that there are ups and downs in the measures taken to strengthen good governance.“There are some victories and losses as well,” the President added.

“We failed to achieve the objective of wiping out fraud and corruption during the past four year period. We have to rally round together and reorganize with great courage to achieve that objective,” the President noted.“It is important to discharge our utmost effort to re-build the country without letting any room for waste, fraud and corruption. All should work hand in hand to wipe out this menace from our motherland,” the President stressed.

The President further said that he is happy to commission the re-established Laggala town, as the first ever green town of the country. Moreover, it is significant that the Laggala town can be considered as the first ever well-planned city of the country.He added that he is a son of a farmer, settled under Mahamanya D.S Senanayake’s colonisation scheme. Farming and farming culture are not new to him since he has been living with the farming culture since childhood.

President Sirisena added that the mega Moragahakanda and Kaluganga multipurpose irrigation project is the last phase of the mega Mahaweli Development scheme.The President highlighted the invaluable service of former Mahaweli Ministers including the first Mahaweli Minister C.P. de Silva and Maithripala Senanayake, Gamini Dissanayake, Gamini Athukorala and so on. While recalling the invaluable service of the late civil engineering giant Dr. Kulasinghe, the President said that the Moragahakanda reservoir was named as the Kulasinghe Reservoir as a mark of gratitude to all patriotic dedicated engineers, who worked for the country and its people.

The President added it was a pleasure to name the reservoir after Dr. Kulasighe since he helped immensely for the development of the agriculture industry in the country. It was Dr Kulasinghe, who took measures to build the twin reservoirs first in the 1990s.“On July 25, 2016 we commenced the construction of the Kaluganga dam. The second largest reservoir in the country is Moragahakanda and Kaluganga reservoir combination” he said.

President Sirisena further said that the government spent Rs. 2,150 million on the construction of the Laggla Green city. Moreover Rs 9,550 million was spent on the road network while Rs.4,500 million spent on the drinking water project for Laggala and suburbs. The entire investment for the Laggala town canal system and twin reservoirs is Rs. 260,000 million. This is the biggest ever investment made towards the national development of the country.

“To overcome poverty, it is important to achieve economic prosperity, improve income prospects,develop the agriculture and industrial sectors while increasing the number of intellectuals,” the President he said. Speaking on the request made by students of the Laggala Central College, which was commissioned yesterday, the President said he would take measures to complete all requests of the students within two three weeks.

The President added that he can be happy when the people of the North are provided with water ending the water scarcity in the region.As a result of the water scarcity,certain people had become water vendors, who are not monitored by any the government institution or officers.

President Maithripala Sirisena opened the new Laggala town in line with the 4th anniversary of being sworn in as the head of state. The old Laggala town was submerged by the Kalu Ganga Reservoir due to the construction of the Moragahakanda-Kalu Ganga Multi-Purpose Development Project.

Laggala green town was built at a cost of Rs.4,500 million with most modern facilities for the people who were displaced due to the Moragahakanda-Kalu Ganga Multi-Purpose Development Project. This town has been designed in compliance with the new urban development concepts to suit the future needs of the people.

Home » President says reversals will be turned into success