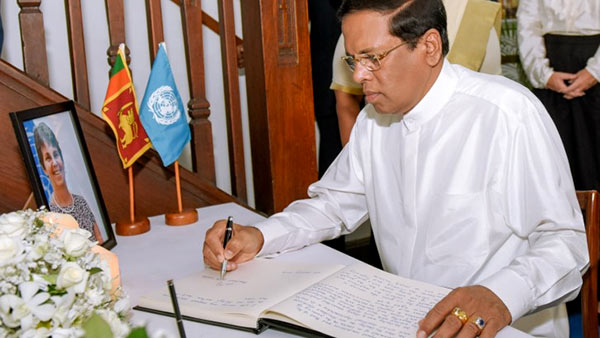 In a special message of condolence to the UN Secretary General António Guterres, the President stated that Ms.Una MaCauley was a talented professional who served in Sri Lanka with a thorough understanding regarding the vision of the UN.

Later, the President extended his deepest sympathies to the UN and the family members and relatives of late Ms. Una McCauley on behalf of the Government of Sri Lanka and its citizens.

Meanwhile, the Ministry of Foreign Affairs also joins the United Nations Country Team in Sri Lanka in honouring the life and work of Ms. Una McCauley, UN Resident Coordinator and UNDP Resident Representative in Sri Lanka .Her wisdom, energy, inspiration, and goodwill that guided the UN-Sri Lanka partnership will always be valued and remembered. A humanitarian and an optimist, she encouraged all to look to the future with a vision for unity and human dignity.Her presence will be deeply missed by all the Ministry of Foreign Affairs says.