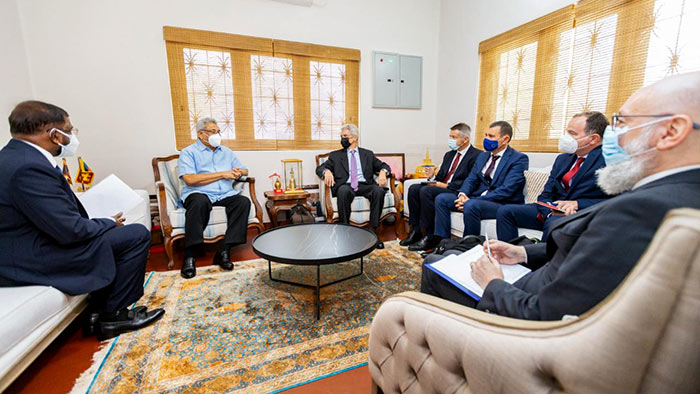 President Gotabaya Rajapaksa says that as the oldest democratic country in the region, which has never been under a dictatorship or an authoritarian regime in any period of its history, Sri Lanka will provide solutions for issues based on democratic systems and models.

The President made these remarks during a discussion with a delegation from the European Union (EU) at his private residence in Mirihana yesterday.

The delegation is expected to review Sri Lanka’s compliance with the agreements which Sri Lanka has already committed to adhere to under the EU GSP+ regime, its cooperation with Sri Lanka and the European Parliament’s views on Sri Lanka.

The representatives of the European Union, who paid special attention to the Prevention of Terrorism Act (PTA), pointed out the need of a timeline based solution. The delegation said that a formal report based on the findings of the visit would be submitted to the European Commission and the European Parliament.

The President said that the necessary Committees have been appointed and the Minister of Justice and the Attorney General have been instructed according to the reports of the Committees and immediate steps will be taken to amend the necessary provisions of the PTA. President Rajapaksa also stated that the country would abide by the agreements on human rights in the world today.

The President also pointed out the impact of COVID-19 pandemic on the economy and the obstacles that the Government faced in fulfilling its expected comprehensive strategies. The President explained the steps taken by the Government despite this situation to address many of the problems caused by the prolonged war and to establish democracy as well as to carry out development in the North and the East. During the discussion, it was also pointed out the steps that have been taken to provide relief to the families of the missing persons and to pay compensation to the families of victims.

The President also stated that even at the UN General Assembly, he stressed the need for the Tamil political parties, members of the Tamil Diaspora and all expatriates to work together to resolve the country’s internal problems and take the country forward.

The President said that he is working with civil society organizations with a mutual understanding and that their support would be sought for the reconciliation process and development in the country.

It was pointed out that instructions have been given not to use batons, water cannons or tear gas to control any of the protests during the last two years and that a separate area has been allocated for protests in front of the Presidential Secretariat.

Though the Government acted in a democratic manner, the President said that the attention has not been paid to that and it was unfortunate that various parties spread misconceptions based on a minor incident.

The President pointed out that steps are being taken to ensure that the public and private sectors are working together, to enhance the private sector in order to contribute better to the development of the country and to adopt the technological strategies of developed countries for a quality public service.

The delegation thanked and commended the President for his in-depth explanation of the Government’s plan to take the country forward.

1 Response to President tells EU delegation: Issues will be resolved through democratic methods