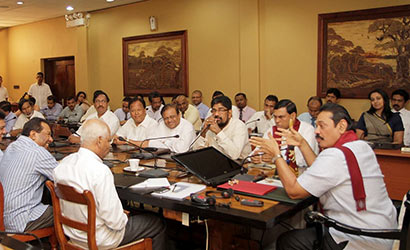 President Mahinda Rajapaksa told the Government Parliamentary Group yesterday (16) to not complicate political issues when there is a presidential poll just around the corner.

The President had been responding to questions from government members about the forthcoming presidential poll which is billed for 8 January 2015 and also in the light of leftist parties wanting a postponement of the presidential poll by two years and for the President to remain in office until his second term was over in full.

The President’s assertion to not complicate issues came when the devolution of power was being taken up for discussion.
Minister of Minor Export Crops Reginald Cooray had asked the President about what the government had in mind about devolution and proposed that it should proceed with it.

The President had said that the Fisheries and Aquatic Resources Minister Rajitha Senaratne had also advocated devolution of power right along, but said that the time was not opportune for the deliberation of this subject at a time when a presidential poll was in the offing.

Meanwhile, the Cabinet of Ministers yesterday approved 45 memoranda at the meeting. There was also a meeting chaired by President Mahinda Rajapaksa for SLFP organizers at Temple Trees last night, the sources said.