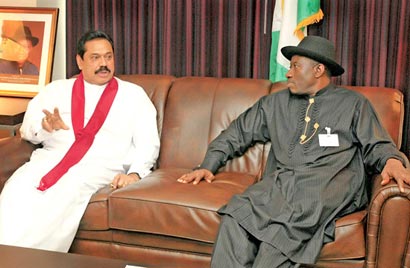 President Mahinda Rajapaksa in New York to attend the 66th UN General Assembly sessions explained to Heads of State of Slovenia, Kirghistan and Nigeria the progress achieved after the defeat of terrorism.

President Rajapaksa during discussions with them on Tuesday afternoon, explained the current situation in Sri Lanka to the Heads of State, including the progress achieved in re-settling internally displaced following the defeat of terrorism, demining operations and the local government elections held in the Northern and Eastern Provinces recently, said a press release by the President’s Media division.

President Rajapaksa also explained to them the massive development schemes currently under way and the economic progress achieved by Sri Lanka.

During the discussions, Kirghistan President Roza Otunbayeva, highly acclaimed the quality of tea produced in Sri Lanka. President Rajapaksa requested her to send a trade delegation from Kirghistan to Sri Lanka to make a detailed study about Sri Lankan tea.

Slovenia’s President Dr Danilo Turk said the peace and reconciliation now in progress in Sri Lanka is an example to the whole world.

He also commended Sri Lanka for achieving a rapid economic growth rate within a short time after ending the conflict.

Matters pertaining to economic, trade and several other sectors vital for both countries figured prominently during the discussions held with Nigerian President Goodluck Jonathan. Both leaders also discussed measures to improve friendly relations between the two countries.

1 Response to President tells Heads of State in New York: Vast progress after defeat of terrorism