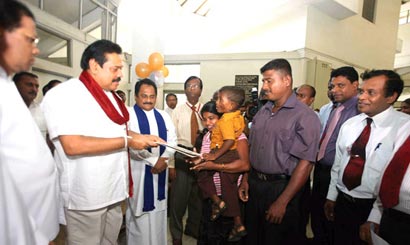 A Rs 20 billion development plan is underway in Kandy to give the world heritage metropolis a major facelift under a Presidential initiative. President Mahinda Rajapaksa addressing the business community and professionals in Kandy on Sunday said that the city would be developed and facilities expanded, maintaining its cultural value, historical significance and scenic beauty.

He said that Kandy would be developed as a world-class city preserving its past glory.

The President also stressed that the 58-year UNP rule in the council had failed to fulfill needs and aspirations of the city dwellers and had also failed to develop Kandy.

“Fifty eight years is enough, you and me, both have a responsibility to develop Sri Lanka’s second largest town, Sri Lanka’s last kingdom and one which houses the Sacred “Tooth Relic,” he told the business community and professionals of Kandy.

The President noted that Sri Lanka was taking giant strides in economic and other areas and had emerged as a middle income earning country.

“We have to keep Kandy in pace with this rapid development”, he added.

President Rajapaksa said that the government had faced certain difficulties in enacting development work in Kandy due to interference by the UNP led Municipal Council.

Despite these obstacles every effort had been taken to develop the city. The development of the roads in and around the city is testimony to the fact he said. The President noted that the government had already spent Rs three billion for development in Kandy during recent times and added that a UPFA led council would further help the government to fast track development in the city.

He urged those present to work towards ensuring a UPFA led Municipal Council at the forthcoming polls to supplement this progress.