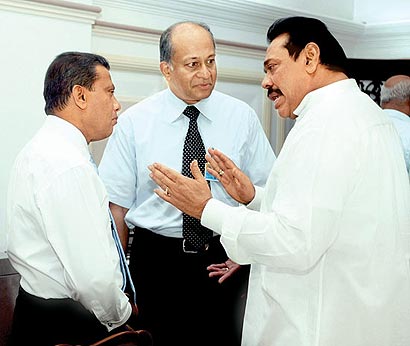 It is the duty of the media to help build amity among all communities and not contribute to fostering hatred among people, said President Mahinda Rajapaksa addressing the Heads and Editors of the Private and State Media at Temple Trees yesterday.

Responding to a question as to what he considered the major challenge in the New Year, President Rajapaksa said it was development, adding that unity and communal amity were essential to proceed with the tasks of development.

Stressing that the media had every right to criticize the Government, which right would always be protected, the President appealed to the media to play an active role in fostering unity among all communities. “Please take every action necessary to heal the wounds of the past,” he said. He made a special appeal to the Tamil media not to encourage efforts to create hatred among the Tamil people against the Sinhalese. Do not promote thinking and ideologies that promote hatred. The suffering caused through 30 years is enough and we must strengthen the process of healing, he said, posing the question “Where would continued hatred lead us to?”

The development work that has been launched was the answer to those who sought to spread the message of communal hatred and may even be trying to revive the forces of division that had been defeated, he said. President Rajapaksa emphasized that having defeated the separatist expectations of Prabhakaran, he was not prepared to give in to the same demand if made by any others.

The Government had invested considerable funds for development in the North, to restore the livelihoods of the people and these efforts should not be negated. All this expense was needed to rebuild what had been destroyed by the forces of terror. As an example he said how the Kilinochchi Hospital that had been built with ADB funding had been destroyed by the LTTE, as it had destroyed the railway, communications facilities, water towers and other common amenities.

The Government had already spent Rs 2.5 billion on restoration and development work in Kilinochchi town alone, that had a population of 27,000 families.

This should open the eyes of those who claimed that nothing was being done for the Tamil people of the North.

President Rajapaksa said that the people in the southern villages also felt the pain of all the years when terrorism was threatening the nation. They felt this pain as much as the Tamil people and were keen to be rid of the hatred of that period, to live in peace and harmony with the Tamil people. He also decried efforts by some sections of the media to exaggerate some of the problems of the country that were not unusual in a post-conflict situation anywhere.

There was turbulence in all post-conflict societies and Sri Lanka had already achieved much in just one and half years after the defeat of terrorism. The Government was aware of these problems, such as criminal activity, which were being addressed. He regretted the efforts by some to use this situation to show Sri Lanka as a failed state and impose burdens on the people through this means.

The Government could be attacked as in any democracy, but the people must not be attacked or made to suffer through such action, carried out with the expectation of lowering the image of Sri Lanka in the world, the President said.