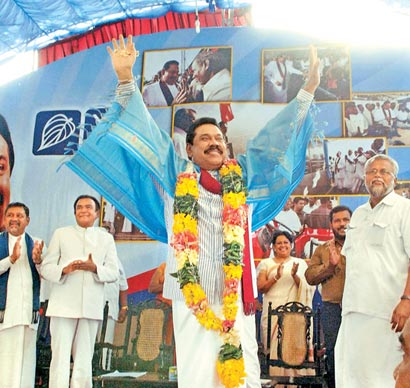 ‘The government will implement Compassionate Justice for ex-LTTE combatants who have been rehabilitated, President Mahinda Rajapaksa said.

President Rajapaksa was addressing a large gathering at Chavakachcheri in Jaffna last afternoon.

He said that almost all ex-combatants who were rehabilitated have become useful persons in society. Of these persons, a considerable number of youths are engaging in foreign employment.

On the resettlement programme, the President said that around 300,000 IDPs have already been resettled by now. Intellectuals who are abroad have to return to Sri Lanka to serve the nation and the country.

“We are the sons and daughters of the same country. The country belongs to all of us. We all have to live in this country peacefully with dignity,” the President added.

He further said that the people of the North can now elect their leaders in a democratic way. During the 30 year terror period, people were not able to experience democracy. As a result of the war, the country has gone backwards by 30 years. The government and the people are duty-bound to drive the country forward. As a people-friendly government, this government is engaging in serving and developing the entire country.

“It is our duty to bring the country back to its past glory, it was lagging for 30 years due to terrorism. We do not need foreign experts to solve our problems, since we are quite capable of solving them”, the President noted.

The President stressed that we can solve our issues in a friendly manner. “Therefore, no foreign mediation is needed in this regard”. President further added that he does what he says and he says what he does.

President Rajapaksa said that the North and East are experiencing rapid development with the dawn of peace. Therefore, the government’s priority is to bring development to areas which were affected by 30 years of terrorism.

The President further said that, he as a people-friendly President, is ready to bring peace dividends to the country, including the North and East. Meanwhile, certain short- sighted, narrow-minded parties are talking about the 13th Amendment without considering the development or welfare of the people living in the North and East. Unlike these narrow-minded people, Minister Douglas Devenanda is standing with the people to bring peace dividends to them. “People were skeptical about their future as a result of the terrorist war. They did not have a positive vision about the future for their children. But today everyone can look forward to the future with confidence. Therefore, the government has begun rapid development initiatives. I am for serving everyone since I am the President of everyone,” the President said.

Earlier the President received a very warm welcome by thousands of cheering people when he arrived at Kopai to address a meeting.

“Everyone is aware of the peaceful atmosphere that has been established throughout the country. People were badly affected by the war for 30 years. The country is now free from the clutches of terrorism and freedom and democracy reign supreme everywhere, he added.

“The country can progress only under this government. Rural areas that lacked development and were ignored for decades are now being developed.

1 Response to President tells people of the North: Compassionate Justice for rehab LTTErs