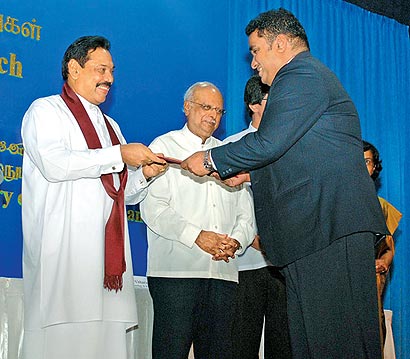 President Mahinda Rajapaksa stressed the need for integrating the enormous talents and potential of local researchers and scientists into the country’s massive development drive.

He was of the opinion that their research should necessarily be made use of, for the development of country. President Rajapaksa made these observations at the Presidential awards for scientific research held at Temple Trees yesterday. The awards ceremony was organized by the National Research Council jointly with the Presidential Secretariat.

Over 380 scientists and researchers who carried out outstanding research in various fields were recognized by President Mahinda Rajapaksa at this ceremony.

President stated that there will be no use of conducting research if the people cannot derive benefits from them. The research should not be confined to study. “There should be a viable mechanism to bring them to an implementation level,” he added.

He added that some institutions which were originally established to promote a research culture in the country ended up by providing medical reports to hospitals.

The President is of the view that this situation should necessarily be changed if scientific research is to flourish in the country.

President Rajapaksa admitted that the Government did not make substantial allocation for certain fields during the past few years. “We are now prepared to make adequate allocations for such fields,” he stated.

President Rajapaksa said that he is aware of the problems faced by the scientists and researchers in obtaining patent rights for their research.

He emphasized that the authorities should look into these problems too.

The President added that the Government has entrusted Minister Prof Tissa Vitharana who is himself a scientific researcher in strengthening this field from the university level upwards.

The President added that there are research institutions where the members of the administrative staff are getting higher salaries and perks than researchers.

“We should have proper understanding of our shortcomings and difficulties we face,” he added.

He added that the researchers and scientists in the North and the East can also indulge their researches free from intimidation with the end of three decade long conflict. The President stated that Sri Lanka ended an era in which the authorities sought foreign expertise for the country’s development activities.

“There was an era in which we expected foreign expertise to build roads and construct canals. This type of mentality deterred the progress of the research culture in the country,” he added.