President, Turnbull agree to extend cooperation in many areas 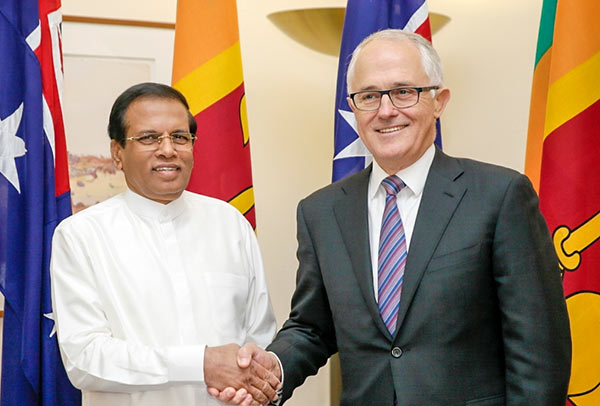 This agreement was reached during their discussions held at the Australian Parliament in Canberra yesterday. The two leaders, after concluding a one-on-one round of talks, held bilateral discussions, in which ministers and officials from both sides participated.

Sri Lanka and Australia signed a joint declaration, a memorandum of understanding and a letter of intent to increase cooperation between the two countries.

These were signed in the presence of President Maithripala Sirisena and Australian Prime Minister Malcolm Turnbull.

The Joint Declaration on Enhanced Cooperation Between Australia and Sri Lanka was signed by Australian Foreign Minister Julie Bishop and Sri Lankan Deputy Minister of Foreign Affairs, Dr. Harsha de Silva, the MoU on a Cooperative Programme on the Epidemiology of Chronic Kidney Disease of Unknown Etiology, between the Australian Nuclear Science & Technology Organization and the Sri Lanka Presidential Taskforce for Prevention of Chronic Kidney Disease was signed by the ANSTO Chief Executive Officer Dr. Adrian Paterson, and High Commissioner, Somasundaram Skandakumar. The Letter of Intent on Cooperation between Geoscience Australia and the Geological Survey and Mines Bureau of Sri Lanka was signed by the CEO of the Australian Institution James Johanson and the High Commissioner Skandakumar. Those who participated in the talks were, Prime Minister’s Secretary Dr. Martin Parkinson, Senior Advisor to the Prime Minister and the Cabinet Sean Starmer, Foreign Secretary Ms. Frances Adamson, Australian High Commissioner to Sri Lanka Bryce Hutchesson, National Security Advisor Justin Bassi and Senior Advisor to the Prime Minister Ms. Philippa King.

The official welcome was held this morning at the Government House, where the President was warmly received by the Governor General, Sir Peter Crosgrove and Lady Crosgrove. The welcome ceremony for President Sirisena included a guard of honour, hoisting of Sri Lankan flag by the Commander of the Unit and playing of the national anthems of the two countries. President Sirisena inspected the Guard of Honour while a 21-gun salute boomed .

Following the welcome ceremony, a luncheon was hosted by the Governor General in honour of President Sirisena. A delegation including Minister John Amaratunga, Deputy Ministers Harsha de Silva, Ajith P. Perera, and Member of Parliament Harshana Rajakaruna and High Commissioner, Somasundaram Skandakumar participated on this occasion.

Home » President, Turnbull agree to extend cooperation in many areas