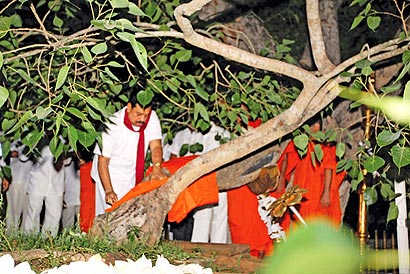 President Mahinda Rajapaksa visited the Mihintale Raja Maha Viharaya and called on Viharadhipati Ven Namalwewa Ratanasara Thera yesterday morning. The President who inspected the development activities taking place in Mihintale, including the Mihintale Meda Maluwa access road and its environs, spoke to Minister Ranjith Siyambalapitiya and Maga Neguma chairman Jaliya Kulasekara over the phone and directed them to pave the Meda Maluwa road with concrete under the present development programme underway in the area.

Ven Namalwewa Ratanasara thera told the President that nearly two million flocked to Mihintale during the Poson festival season and the President directed officials present to provide improved facilities at Mihintale to cater to the pilgrims visiting the sacred area. A press release by the President’s Media Division said the President also gifted a Buddha statue to Ven Ratanasara Thera on this occasion.

The Maha Sangha chanted Seth Pirith and invoked blessings on the President. The release said that the President visited the Anuradhapura sacred city on Sunday and paid homage to the Jaya Sri Maha Bodhi.

The President later visited the Ruwanweli Seya and participated in religious observances.

The President requested all main and by roadways in the Mihintale sacred city concreted or carpeted, in addition to the adequate supply of drinking water and electricity to the area.

President Rajapaksa also accepted an invitation from the Maha Sangha to participate in next year’s Mihintale Aloka Pooja sponsored and organized by Lake House with the assistance of CEB and Abans Ltd.

The President also said that he would initiate a programme to provide housing facilities to parents of the novice bikkhus who do not have proper and permanent housing.