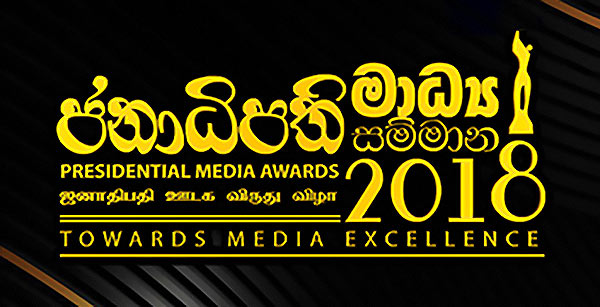 The Presidential Media Awards to evaluate journalists and their contribution to establish a healthy media culture will be held at the BMICH under the patronage of President Maithripala Sirisena and Prime Minister Ranil Wickremesinghe today.

The objective of organizing this award ceremony on annual basis is to evaluate skills, talents and special capabilities of journalists towards ushering in a media culture with social responsibility.

It is also aimed at encouraging the media in building up a well-informed civil society and to provide state sponsorship for journalists through evaluation of their performance covering the entire mass media field.

The identification and evaluation of talents, skills and the core competencies of journalists by providing guidance and motivation to felicitate professional journalists will be an opportunity for young and energetic journalists to excel in the field of mass media. Applications submitted for awards should be a production of their own preferably sent through heads of the institution but it is also possible to submit it directly with the senders own certification.

Creative work done in the period between January 1, 2017 to December 31 2017 were considered for the awards.

The main criteria considered to be qualified for the awards were that the creative work should be their own and the relevant production must have been prepared as suitable to Sri Lankan viewers or listeners. No foreign creations were considered.

The main committee was presented with nomination recommended for awarding through sub committees of professionally qualified senior journalists appointed by the Ministry with the recommendations of media heads. Following the advertisements published in the media on July 13 2018, 1,674 nominations were received within the specified period. It is expected to award to each field from all three languages.The numbers of awards to be given away are 51 covering all categories inclusive of the four life time awards.

In addition to selecting the award winners for their creations, the panel of judges have selected four distinguished media personnel for life time awards.They are Dr.Edwin Ariyadasa in the field of print media, Karunarathna Amarasinghe in the field of radio, Lucien Bulathsinhala in the field of television media and Lakshman Jayawardene for the contribution in the field of web media.