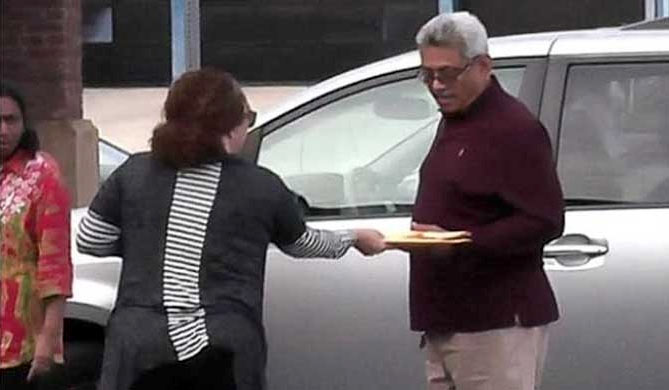 Sri Lanka’s former powerful defence chief has been accused of torture and killing during the country’s bloody operation against Tamil militants, in an legal filing he was served in the parking lot of a grocery store.

Gotabaya Rajapaksa, 69, the bother of former president Mahinda Rajapaksa, and who for a decade was the minister in charge of the country’s powerful military, has been sued for damages in a civil claim in the United States, where he has joint citizenship.

The lawsuit, which served to Mr Rajapaksa in the car park of the Trader Joe’s supermarket in Pasadena, California, alleges that Mr Samathanam, an ethnic Tamil, was arrested on false charges in Colombo in September 2007 by Sri Lankan police who at the time reported directly to Mr Rajapaksa.

It was brought under the Torture Victim Protection Act of 1991, which gives torture victims legal redress in US courts.

Visiting Sri Lanka to marry his wife, Mr Samathanam was detained for three years and repeatedly denied access to a lawyer or a judge, the lawsuit claims.

Under Mr Rajapaksa’s command, guards tortured Mr Samathanam, threatened to rape and kill his wife and child, and made him watch the electrocution of other prisoners. He was forced to sign a false confession before being released in August 2010 on a plea deal.

Meanwhile, a separate case was filed by the family of murdered Sri Lankan editor Lasantha Wickremetunge, whose January 2009 assassination stunned the island and the international community. He was an outspoken government of Mr Rajapkasa and his brother.

In an essay that was written before his death and published posthumously by his newspaper, The Sunday Leader, he wrote: “People often ask me why I take such risks and tell me it is a matter of time before I am bumped off. Of course I know that: it is inevitable. But if we do not speak out now, there will be no one left to speak for those who cannot.”

Mr Rajapaksa was in charge of the effort to end the civil war that had marred Sri Lanka for three decades and wipe out the Tamil Tiger rebels, who had used suicide bombers and child soldiers as part of their effort to secure a separate ethnic homeland in the north. Sinhala Buddhists constitute around 70 per cent of the island’s population.

In the final stages of the 2009 operation, tens of thousands of Tamil civilians were caught up in the fighting, some of them being used as human shields by the militants. Survivors accused the Sri Lankan military of shelling designated safe zones. A UN panel that investigated the final stages, estimated that around 40,000 civilians were killed.

“While I was in prison I learned what inhumanity looks like,” Mr Samathanam, the plaintiff, said in a statement. “So far, there has been no accountability, so I am happy to take this first step to get justice.”

Mr Rajapaksa has been touted as a potential presidential candidate for his family’s party. He was reportedly served with the notice while making his way to a “Meet the future president” event hosted by a former Sri Lankan consul in Los Angeles.

Mr Rajapaksa did not respond to attempts to contact him.

The torture lawsuit is being overseen by Mr Gilmore, who earlier this year won a civil case against the Syrian government, in which it was ordered by a Washington DC court to may $300m in damages for the killing of Sunday Times journalist Marie Colvin. She and a French photojournalist, Rémi Ochlik, were killed in a rocket attack on a media centre in the rebel-held city of Homs in 2012.

“Mr Samathanam was one of countless civilians detained and tortured in Sri Lanka because of their ethnic Tamil identity,” said Mr Gilmore. “Under international law, Mr Rajapaksa bears command responsibility for the abuses carried by his security forces.”