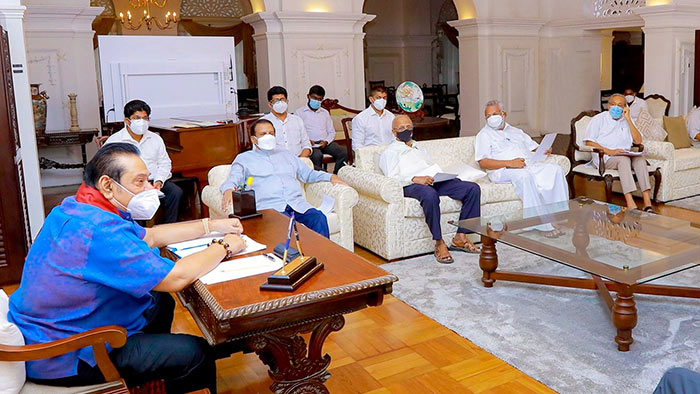 The main focus of the meeting fell on the role of the party in supporting the government in the face of the COVID-19 epidemic and the proposals to be presented in the 2021 Budget including a mechanism to educate government parliamentarians about such important bills beforehand.

In this nearly-two-hour meeting, attention was also drawn to the potential consumer benefits from the operation of the Yugadanavi Power Plant, the Prime Minister’s Office said in a press release.

Speaking to the media following the meeting with the Premier, Minister Weerawansa said that the party leaders have requested for additional discussions on the matter with President Gotabaya Rajapaksa.

New Fortress Energy Inc., a global energy infrastructure company based in the United States, announced on Sep. 21 that a definitive deal was executed with the Sri Lankan government for its investment in West Coast Power Limited (WCP) – the owner of 310 MW Yugadanavi Power Plant in Kerawalapitiya.

As part of the transaction, New Fortress will have gas supply rights to the Kerawalapitya Power Complex.

The company will acquire a 40% ownership stake in the WCP and plans to develop a new liquified natural gas (LNG) receiving, storage and regasification terminal located off the coast of Colombo.

The LNG terminal is expected to begin operations in 2023.

The deal came under heavy criticism of the Ceylon Electricity Board Engineers’ Union, who alleged that the agreement had violated the tender procedures.

Meanwhile, Opposition Leader Sajith Premadasa, in a statement issued today, expressed his objection to the selling of 40% stakes of the WCP.

None of the shareholders involved in selling of the stakes can escape their responsibility for this major mistake, he stressed.

Further, Premadasa noted that the Samagi Jana Balawegaya (SJB) aims to stand against the government’s move.