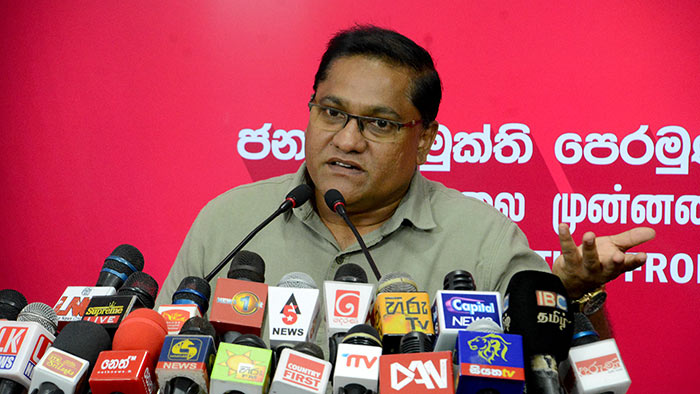 The JVP yesterday alleged that the government was engaged in subterfuge to get its cronies to arouse communal disharmony to cover up its failure to bring to justice those responsible for the Easter Sunday carnage.

Addressing the media at the party headquarters in Pelawatte, JVP Propaganda Secretary MP Vijitha Herath said two years and five months had elapsed since the Easter Sunday attack. “The government has not yet taken action against former President Maithripala Sirisena and Prime Minister Ranil Wickremesinghe for their failure to prevent the terror attacks. The government still has failed to identify who really masterminded those attacks. The Public Security Minister has come up with his own theory that Naufer Moulavi was the mastermind. People expected that justice would be delivered but that has not been done yet.

“The government has got its cronies to arouse communal disharmony and to attack those who are calling for justice to the victims of Easter Sunday terror attacks. Those middle men while trying to save the government are actually doing their utmost to derail the investigations. When Archbishop Malcolm Cardinal Ranjith took the lead to prevent communal violence soon after the attacks, he was praised. Those who once praised him today have taken cudgels against him. Now the Cardinal is under malicious attacks and criticism. This is very unfortunate,” MP Herath said.