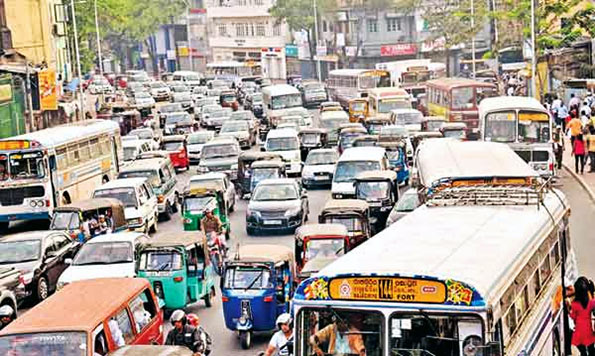 The one-week pilot project on the priority lane for buses commenced yesterday morning from Rajagiriya to Ayurveda junction.

Under the pilot project, priority lanes for buses have been allocated from Rajagiriya to Ayurveda junction and from Ayurveda junction to Rajagiriya. The pilot project will continue until next Sunday (March 19) with the aim of finding a long lasting solution to the traffic congestion in Colombo. According to the Western Development and Megapolis Ministry, at least 150-180 buses are plying per hour from Battaramulla to Colombo Fort during the rush hours from 7am to 9am and 4.30pm to 7pm carrying about 8,000-10,000 passengers.

The project is aimed at easing the traffic congestion to allow these passengers to reach their destinations as soon as possible.

Feedback will be collected at the end of the seven days’ pilot project to know the shortcomings, practical problems, people’s reactions, and reactions of private and state sector bus drivers as well as private vehicle owners.

After addressing the problems identified during the pilot project, the priority lane will be implemented from Battaramulla to Fort (10kms). KOICA is giving consultancy and assistance to carry out the project, while Prof Amal Kumarage has been appointed as the Project Consultant.

Western Development and Megapolis Minister Patali Champika Ranawaka, Transport and Civil Aviation Minister Nimal Siripala de Silva and Deputy Minister Lasantha Alagiyawanna also participated in the commencement of the pilot project. Meanwhile, Minister Patali Champika Ranawaka addressing the media said that the pilot project would be implemented as a solution to the prevailing traffic congestion and to uplift the standards of public passenger transportation.

The project was implemented with the collaboration of Transport Ministry, Megapolis and Western Development Ministry and Road Development Authority (RDA), he added. Minister also requested the private vehicles to provide their support and to have patience for any inconvenience.

He further said that this would be the initial step to collect data in order to implement an express public bus service.