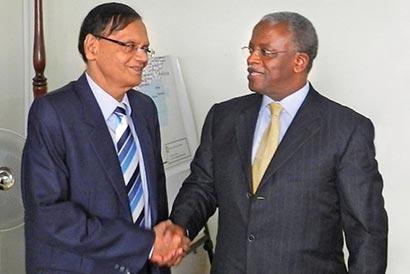 External intervention at this time is singularly unhelpful and will indeed inflict grave damage on a sensitive internal process which is moving forward, External Affairs Minister Professor G L Peiris said in Kampala, Uganda on Tuesday.

He made these remarks during a series of meetings with Ugandan government leaders.

“The strength of the feeling in the country is reflected in the manifestation of opinion throughout the nation on Monday, by all communities in all parts of the island in unison,” the minister said.

Prof Peiris said all religious leaders including Buddhist prelates and Malcolm Cardinal Ranjith had expressed this view with great emphasis.

and Reconciliation Commission to Parliament on December 17 last year.

He said that the government had identified the steps required to implement the major recommendations contained in the Report, together with priorities, while also assigning responsibility to different ministries, departments and statutory corporations for giving effect in a systematic way to different categories of recommendations.

The minister laid particular stress on the work being done by the Attorney-General, a member of the Sri Lankan delegation in Geneva, in respect of accountability issues.

A significant development, Professor Peiris commented, is the completion of a census by the government, which enables numbers of families and persons in the Northern Province affected by the war to be determined on a verifiable basis, without surmise or speculation.

In light of the results already achieved on the ground in respect of a wide range of issues including resettlement of internally displaced persons, the rehabilitation of ex-combatants, and the revival of the economy of those parts of the country specially affected by the conflict, these represent a degree of progress which far exceeds what has been accomplished in comparable post-conflict situations in other regions of the world, Prof Peiris said.

He commented on the brevity of the period – less than six weeks – which had elapsed between the publication of the Commission Report and the decision by the United States to bring a resolution in respect of Sri Lanka at the Human Rights Council during its current session.