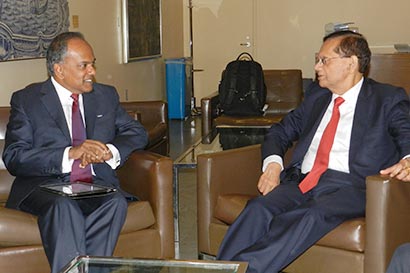 The Minister of External Affairs, Prof.G.L.Peiris met K Shanmugam, Foreign Minister of Singapore on the sidelines of the UN General Assembly. At the meeting with his counterpart Minister Peiris discussed technical cooperation and assistance to Sri Lanka . He also briefed the Foreign Minister of Singapore on the reconciliation process and the preparations for the UPR. Observing that Sri Lanka had recently hosted the Commonwealth Parliamentary Conference last month, Minister Peiris noted that it was a precursor to the Commonwealth Heads of Government Meeting to be held in Colombo next year. The two Ministers discussed cooperation on the multilateral front.