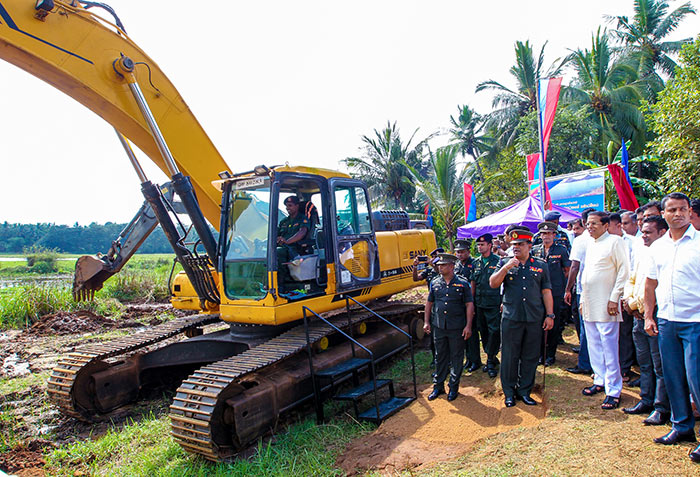 The inauguration of the programme of renovating of 2400 irrigation tanks was commenced yesterday (March 02) under the patronage of President Maithripala Sirisena with the intention of recreating the ancient irrigation development in the country to emerge as a self-sufficient nation.

Accordingly old irrigation tanks, which were not renovated for a long period of time,in the North, East, North Western and North Central provinces will also be renovated under this programme. 123 irrigation tanks in the Polonnaruwa district will be developed in the first phase.

The renovation works of the ‘Chandana Pokuna’ tank in Hingurakgoda area was commenced under the patronage of the President yesterday (02) as the first irrigation tank of this programme.

This lake provides water to cultivate thousands of acres of land since the time of ancient kings. The  ‘Chandana Pokuna’ lake which has a gross water capacity of 800 acre/feet provides its benefits to 300 farming families in the area.

These renovations works carried out with the support of Sri Lanka Army under the “Pibidemu Polonnaruwa (Awakening of Polonnaruwa)” District Development Project.

The President pointed out that under the previous government too this kind of projects were implemented, but as a result of not implementing under proper plans those programmes were ended up with disappointment. He further said that it is the responsibility of everybody to contribute to achieve success in this programme to give a better living standard for the farming community in the country.

The renovation activities of the ‘Chandana Pokuna’ was estimated to be around Rs. 16 million. However, later it was decided to carry out renovation with the assistance of the Sri Lanka Army with an expenditure of around Rs. 2.5 million.

Meanwhile handing over the two-storeyed class rooms building to the students of Dimbulagala Medagama Maha Vidyalaya held today with the presence of the President.

The President was warmly welcomed by the school students and he signed the memorial book after opening the commemorative plaque.

Later, the President joined to enjoy a song sung by the students of music section of the school.

A tree was planted at the school premises by the president to mark his presence.

Later, the President joined to hand over three-storeyed building to the students of Manampitiya Tamil College.

This building with fully-equipped classrooms has been constructed under the district development project ‘Pibidemu Polonnaruwa’.

The President signed the souvenir book at school, after vesting the building with the students.

Later, the President joined to enjoy a dance item performed by the school dancing troop.

Principal K. Wijendran, teachers, students, parents, old students and others were present at this occasion.