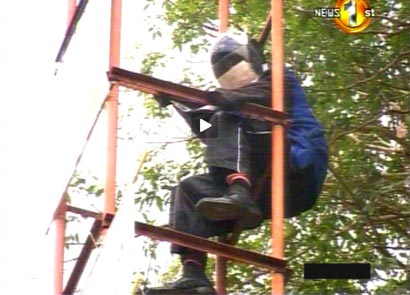 September 14, 2010: An unidentified person has climbed a steel tower at the Vihara Maha Devi park opposite Horton Place roundabout demanding solutions for problems faced by the country’s youth.

Newsfirst reporter at the scene said that the man is wearing a helmet and is covering his face.

The protestor has also dropped a leaflet warning that in the event attempts are made to bring him down from the tower, he would consume poison.

Police as well as the Fire Brigade have also arrived at the scene.