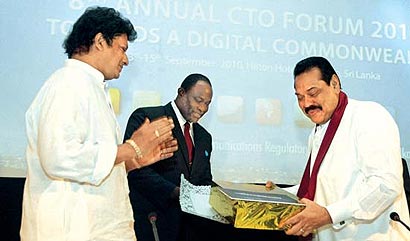 Sri Lanka today is among the most widely connected countries and societies in the Asian region. It is emerging as the telecom hub of the South Asian region, President Mahinda Rajapaksa said yesterday.

Addressing the eighth annual Forum and the 50th Council Meeting of the Commonwealth Telecommunications Organization (CTO) in Colombo, President Rajapaksa told the gathering, including representatives from more than 50 member nations, that this was a significant achievement for a country which recently emerged from nearly three decades of destructive terrorism.

The President also said the improvement of telecommunications and computer literacy will contribute towards realizing the vision of being a tri-lingual nation by 2020.

President Rajapaksa speaking as the Chief Guest during the inauguration of the forum, brought to the gatherings’ attention that Sri Lanka today had more than 14 million mobile phone users and nearly 3.5 million fixed line telephone users, in a population numbering a little over 20 million.

“This covers over two-thirds of the population and the numbers keep increasing each day. If it is not so already we can soon lay claim to be the land with the most Broadband Connectivity in all of South Asia and much of Asia too” he added. President Rajapaksa pointed out that foreign investors had found the sector to be the most profitable due to its rapid growth and added that the promise kept growing.

President Rajapaksa pointed out that having understood the needs for the future, the Government had taken computer literacy and Information Technology to the villages.

“In the past five years we have established 600 plus Nenasalas, our brand of rural tele-centres which would soon exceed 1,000. The private sector is encouraged to participate,” the President said outlining some of the measures.

President Rajapaksa said the Government intends to make Sri Lanka a focal point in the region in Shipping and Marine Activity, Airports and Aviation, Power and Energy, Trade and Commerce and Knowledge and to make it the Wonder of Asia.

“It is in achieving these goals that we see the relevance of your theme for this Annual Conference “Towards a Digital Commonwealth —— Broadband Connectivity for All”, he said.

Post and Telecommunications Minister Jeevan Kumaratunga, External Affairs Minister Prof G L Peiris and TRC Director General Anusha Pelpita were present alongside a host of both local and foreign delegates. The three day conference is expected to identify best-practice policies, regulations, investment options and deployment strategies that are best likely to connect consumers in semi-urban and rural areas in the shortest possible time.