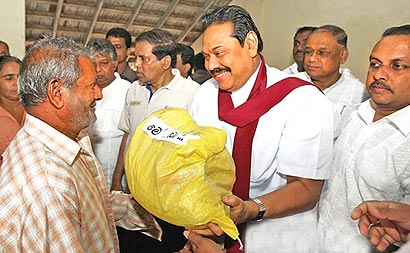 President Mahinda Rajapaksa yesterday directed State officials to identify the present disaster caused by heavy rain and floods and provide urgent relief to the affected people without restricting themselves to the stipulations of official circulars only.

The Government would always stand by decisions taken by the State officials for the welfare of the common masses. The President said so addressing State officials in the Polonnaruwa district at the Hingurakgoda Ananda Balika Vidyalaya during a fact finding tour in the Polonnaruwa district about welfare activities provided to flood affected people.

The President said it is the ordinary folk who had faced the brunt of the flood havoc and it was the duty of all to join hands and help them at this hour of need without any discrimination or petty considerations.