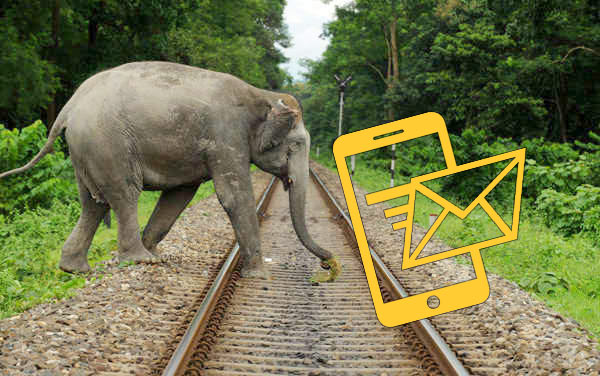 An SMS alert service has been commenced as of yesterday (10), as the first phase of the project on reducing train collisions with elephants.

This implementation will be carried out based on the information gathered from the Department of Wildlife, the general public and the officers of railway service.

Accordingly, this 24-hour SMS alert service would be executed to send out information on elephants roaming around railway lines.

Speaking to the media at a media briefing at the Railways Head Quarters, the General Manager of Railways (GMR) M.J. Dilantha Fernando said train-elephant collisions could not be stopped 100 percent but it could be controlled.

“People can inform about elephant herds through the hotline 24-hours. As soon as an SMS sent to through this number it will be recorded in a system in the Wildlife Department. “Then the SMS will be forwarded to Railways Department and then forwarded to a registered group in the railways.

The SMS will be delivered among the group as ‘Elephant ALT’,” he said. He said that a typical SMS Alert would indicate the number of elephants, location, area, and the time and the track. Sample SMS – ElephantALT – Elephant Herd – Seen at 128.5 mile post – Between Galgamuwa-Tabuttegama at 19.34 – North Line

Meanwhile, the General Manager of Railways (GMR) Dilantha Fernando says that the Railway Department intends to deploy the power-set train imported from India for commuting without delay.

He said that a group of Indian officials had run tests yesterday, to detect defects on the imported train.

He further said that more power-sets and train engines are slated to be imported during the next year and that plans are underway to establish new railway lines.